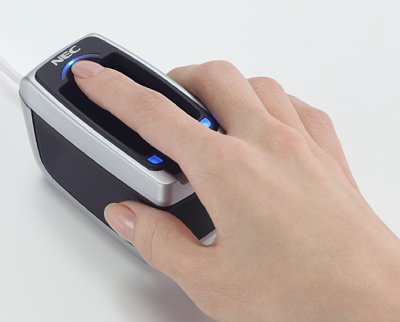 NEC today announced it has developed the industry’s first contact-less biometric authentication system that can read both fingerprints and finger veins. According to the company, the “HS100-10 Contactless Hybrid Finger Scanner” is extremely difficult to deceive and makes it possible to authenticate people with close to 100% accuracy.

The way it works is that the person in question has to hold their hand in front of the reader to let a camera shoot pictures of the fingerprint and finger vein. As no physical contact is needed, the system can also be used by people with dry or moist fingers.

The data from those two biometric markers is then compared with a database of registered individuals (the scanner connects to a PC via USB 2.0).

NEC plans to sell their system starting in May, primarily targeting financial institutions and public organizations in Japan, the US and parts of Asia. The company hopes to sell up to 400,000 units of the system in three years (priced at between $305 and $370).