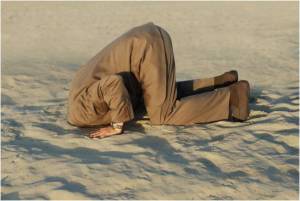 We expect perfection from companies in Silicon Valley. The general consensus is that Yahoo is one of the worst run tech companies in the world, never mind it’s still profitable, cash-rich, and one of the largest media assets in the world. We get outraged and hit the BUBBLE! panic button when valuations of startups like Facebook, Zynga and Twitter get in the double digit billions, never mind their growth rates, user engagement and (in the case of Zynga an Facebook) actual revenues.

So how can we be so apathetic when we see true abysmal fiscal neglect, especially when it’s that of a pseudo-company in which we all essentially own shares?

That pseudo-company is the United States government and in a thorough report issued today, Kleiner Perkins partner Mary Meeker has taken all emotions, politics, spin and manipulation out of the issues, to present a steely-eyed view of just how hosed our financial situation is. Spoiler alert: It’s not pretty. America is gripped by a new red menace and this time, it’s not the commies– it’s a sea of red ink. If politicians reported to voters the way management reports to shareholders, no one would finish out their terms.

If you’re a tax-paying American, you should read the report (embedded below) to see how your money is being spent. If you’re not an American, you should read it too. Far too often blogs like ours trumpet the advantages of living and starting a business in this country, of which there are many. But here’s a sober view of the downside of our wishfully innate belief that we deserve to have it all: We are in a deep financial hole, and there’s not an easy, pain-free or politically palatable way out.

But let’s leave politics aside, as Meeker and her team do, and look at some of the financials. America’s revenue has been flat for ten years. 40% of that income comes from individual tax payers. This surprised me: If you exclude Medicare and Medicaid and one-time charges, America’s profit & loss statement isn’t bad. We have had a 4% median net margin over the last 15 years.

But Medicare and Medicaid are huge exclusions, and Meeker’s report points the finger at them as the biggest culprit for why our financial situation is so untenable. Thanks largely to these unfunded entitlement programs, our cash flow is negative $1.3 trillion, or about $11,000 per household. This isn’t a George W. Bush or Barack Obama issue. Cash flow has been negative for each of the past nine years.

There are a few reasons the situations with Medicare and Medicaid are so bad. First, unlike social security and unemployment, there is no direct funding mechanism to support these programs. Second, the cost is 10x higher than was projected when Medicare and Medicaid were enacted. Why were the estimates so far off? It’s a combination of the aging population, people living longer while the retirement age has barely budged, higher-dollar expectations of care as medical advances have been achieved, and an expansion of who can receive these programs.

And there’s a bad market force at play: Private sector costs increase to help offset lower-cost public programs, which only pushes more people out of privately-funded programs and into public ones. More than 35% of the US population receives entitlement dollars or is on government payroll, up from 20% in 1966.

The report examines the cultural impact of this, asking, “Given the high correlation of rising entitlement income with declining savings, do Americans feel less compelled to save if they depend on the government for their future savings? It is interesting to note that in China the household savings rate is ~36%, per our estimates based on CEIC data, in part due to a higher degree of self-reliance – and far fewer established pension plans. In the USA, the personal savings rate (defined as savings as percent of disposable income) was 6% in 2010 and only 3% from 2000 to 2008.”

Indeed, if it weren’t for Medicare and Medicaid, the numbers show there’d be plenty of room to spend more on defense, education, law enforcement, transportation, infrastructure and energy and still break-even. Meeker notes that our global competitors– particularly countries like China and India– are investing more heavily in those areas.

There’s much more on the financials in Meeker’s report, and some recommendations of how to boost revenue long term through R&D spending and immigration reform. But the interesting thing is why she wrote it: Because for all the hand-wringing over the cost of health care and the state of our deficit, she had a hard time finding the simplest data for what America’s financial situation was.

Last year at her annual Web 2.0 Summit address, she included a slide showing America’s flat revenue, before she got into her presentation on mobile computing, and was stunned at how many people came up to her afterward to express their shock that our revenues weren’t growing. It convinced her to spend some time taking a deep look at America’s financials, and pull out all the politics and emotion to just look at the facts– something we almost never get in a world where our top news sources are Glen Beck, MSNBC and the Daily Show. As a result there’s something for every party or talking head to love and hate in the report– the true sign of balance. Meeker started the project while still at Morgan Stanley, and said in a call this morning she’s going back to her day job tomorrow. There’s no USA, Inc. Part 2 coming out, and no Al Gore-like “Inconvenient Truth” tour planned. It was a one-time project, born of her own curiosity and belief that Americans should know where their money is going.

But do people want to know the truth? And if they do know the truth, will they push politicians to act on it? As the report points out 80% of Americans indicate balancing the budget should be a top priority, but only 12% support cutting spending on Medicare and Social Security– two of the biggest reasons our financial situation is so untenable. You can’t wish this problem away.