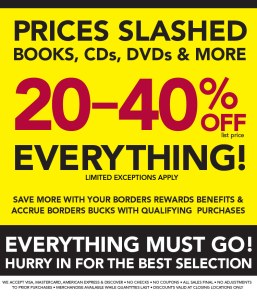 Not amazing in a fun way – although the idea of a typically perky Borders employee being handed their pink slip does lend itself to mean-spirited satire: “oh, pink slip, great choice, I’ve been meaning to read that one myself – did you find everything you need today? Fantastic! Do you have a Borders reward card?”

No, it’s amazing in a “woah, how the hell did that happen?” way. It seems like only yesterday that we were cursing Borders for driving local independent bookstores out of business. And yet, this time next month, America’s streets will still be littered with thousands of independent bookstores. Borders stores? Not so much.

Explaining the global fall of Borders – their UK arm collapsed last year – isn’t quite as simple as blaming Amazon and the rise of ebooks. But it mostly is. The company took a big gamble a decade or so ago in focusing on the notion of bricks-and-mortar book shopping as an “experience”. Stores were built with coffee shops and comfy chairs and warm little nooks in which people could hang out all day and read all the book and magazines they wanted. Unfortunately, after finishing their coffee and their free reading time, many of those people subsequently went home and took advantage of Amazon’s significant discounts to actually buy books. Only those few customers who demanded instant gratification needed to actually pay full price in store.

Then, with the arrival of the Kindle, even those impatient shoppers had no need to visit Borders.

So, with Borders gone, Barnes and Noble struggling and independent stores still closing in their dozens, is this the beginning of the end for real world bookstores? Actually, I think probably not. In fact I suspect the death of Borders might actually cause something no-one in the book trade ever thought they’d see: a resurgence in independent book stores.

For a while, Borders – and the bigger (and for now more solvent) Barnes and Noble – represented a kind of mushy middle for bookselling. On one end of the spectrum sits Amazon – colossal of inventory, quick of delivery, soulless of personality. If you know exactly what book you want, Amazon is the place to buy it.

At the other end of the spectrum sit the independents – mom and pop stores and dusty used bookshops, staffed by knowledgeable bookworms eager to recommend something quirky (and possibly second hand) that they themselves have read, and think you might like. Borders plunked itself awkwardly in the middle, trying to out-stock the former (and failing) and to out-personality the latter (and failing). Even if Borders couldn’t replace the independent bookstore experience, the existence of a giant competitor in the their midst certainly hit mom and pop’s bottom line. No-one did well from the fight except for Amazon.

Now, with Borders out of the way, leaving absolutely no major chain book store in some markets (including San Francisco, which had three Borders but no Barnes and Noble), the independents have a real opportunity to push back.

There are, after all, some experiences which Amazon will never be able to replicate: attending book readings by visiting authors, drinking coffee while flipping through magazines, making eye contact with sexy hipsters over the Charles Bukowski shelves… The biggest opportunity for independents to thrive, though, is in the used book market. Used books represent a huge inventory headache for e-tailers but are wonderfully suited to casual in-person browsing, and not just because they smell so freaking good.

By combining a regular flow of quirky new titles, a decent stock of used books, a ton of genuine expertise and enthusiasm, and a drop or two of decent coffee, America’s independent book stores once again have a chance to thrive. And for everything else, Amazon has earned its spoils.

As a lover of books, and of bookstores, I have to say that bright future excites the hell out of me — perhaps enough to stop me mourning the bazillion Borders reward points I’ve racked up over the years and which are no barely worth the plastic they were stored on.

In other The Internet vs The Book Industry news, attentive readers might remember a column I wrote last month, bitching about how my forthcoming book still didn’t have a US publisher, and proposing ways in which the Internet might disrupt international rights sales. Sadly, my call for an entrepreneur to build an eBay for international rights remains unheeded — however, the column did have one amusing and ironic side effect.

It turns out that Gary Baddeley, President of one of my favourite independent publishing houses – The Disinformation Company in New York – is an avid TechCrunch reader (not least because Disinfo sublets part of their office to TC’s NYC bureau). On reading the column Gary took pity on my whining and emailed me to ask for an advance copy of the book. Long story short, thanks to the power of TechCrunch (and, of course, Gary’s exquisite literary taste) The Upgrade finally has a US publisher and will be available in all good American bookstores (except Borders, obviously) early next year. More info on my personal blog.