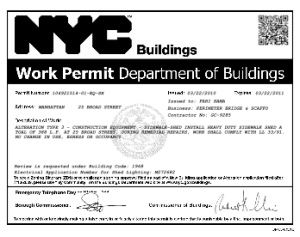 New York City’s Mayor Michael R. Bloomberg today announced the use of Quick Response or QR codes (which are something like a smartphone-readable barcode) on building permits, to provide New Yorkers with easy access to information related to buildings and construction sites throughout the city.

Smartphone users who scan a QR code on a construction permit in New York, according to a press release from the mayor’s office, will get “details about the ongoing project – including the approved scope of work, identities of the property owner and job applicant, other approved projects associated with the permit, [and] complaints and violations related to the location.”

The QR codes will link users to a mobile version of the Department of Buildings Information System, and will give them the option to click a link that will initiate a phone call to the city’s 311 phone service, where they can register a complaint about noise, safety or other concerns.

As permits at 975,000 building and construction sites that already have them are replaced, they will have QR codes added; all New York City permits are expected to have QR codes by roughly 2013.