In a perfect world, the fax machine would have taken the hint by now and made a graceful exit as it was supplanted by superior (and more environmentally friendly) technologies like email and e-signatures. Alas, faxes are still around, and some businesses insist on using them on a daily basis. Fortunately companies like eFax have sprung up to serve as stand-ins for fax machines, and now there’s a new Y Combinator-funded startup that’s looking to make life even easier. Meet HelloFax.

Now, online fax services aren’t anything new. eFax and MyFax (which was just acquired by the former) both offer robust services to deal with faxes without having to actually own a machine. At least, that’s the promise. But HelloFax founders Joseph Walla and Neal O’Mara say that these services make it a pain to actually fill out forms and sign documents, which leads people to print them out, sign them, and then scan them into their computers to send them back (which sort of defeats the point). HelloFax wants to fix this.

The service is quite straightforward: you upload your document and HelloFax will present it as an editable image, allowing you to add text and signatures from within your browser. Once you’ve filled out your forms and signed all the X’s, you enter an email address or phone number, and HelloFax will send it over. If you want to make your signature especially authentic you can write it on a piece of paper and upload a snapshot to HelloFax, or you can just use your mouse.

eFax does actually offer software to sign documents on your computer without having to print them out, but it’s a downloadable client — HelloFax’s solution works directly from the browser, which Walla believes is an industry first.

The service charges on a per-fax basis ($1.99 per fax) and it also offers subscriptions, which frequent users will want to opt for. Walla says the one-off pricing option differentiates HelloFax from eFax, which forces users to sign up for subscriptions. You’ll also get 20 faxes free if you sign up the service by Friday.

At this point HelloFax can only send faxes — you can’t receive them yet. Walla says this should be coming in the next month or so, and that you’ll be able to get your own HelloFax number for a premium charge.

Another gripe is that the text editor really treats the whole document as an image, so you can’t jump between fields the way you could in, say, Acrobat. But even without that, I’d still rather use HelloFax over a desktop app to edit my faxes. And Walla says improvments to the editor are on the way.

Note that there are even more alternatives to faxing, like EchoSign, which lets you sign documents via email. Unfortunately some businesses still demand that they receive a hard copy, which is where HelloFax comes in handy. 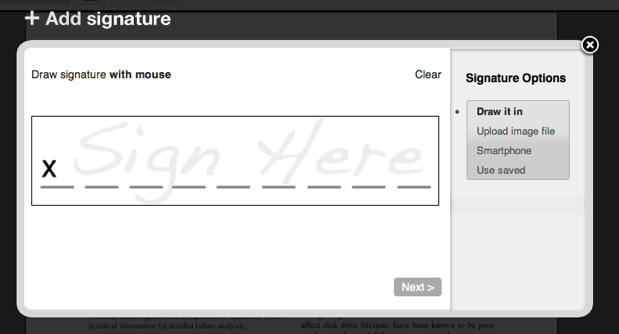