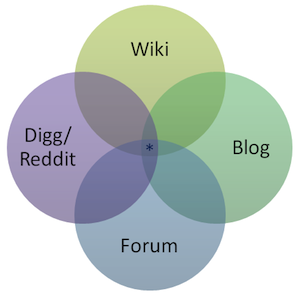 The Q&A land rush is on. Quora, of course, has been hyped to the moon, and not without reason. Fortune magazine recently profiled five more Q&A sites, and three new ones just launched: Cloudy, where your friends answer your questions via SMS; InboxQ, Q&A on Twitter; and Setlr1, which is like Twitter for yes/no questions. Is this a bubble full of copycats doomed to wither into Yahoo Answers Redux? Maybe – but I don’t think so. I think there’s something important going on here, and it’s more than just questions and answers. I think these are the first skirmishes in the reputation wars.

The identity wars are already over. Facebook won, Twitter snagged the silver medal, and OpenID lost. Log In With Facebook and their associated Open Graph have succeeded so thoroughly that Facebook increasingly defines users’ online identities across a whole panoply of sites. But who will define and codify our online reputations? That’s a question whose answer will matter – a lot.

Right now we only have ad-hoc measures to determine online reputations: LinkedIn’s recommendations, Twitter users’ following:followers ratio, third-party influence measurements a la Topsy, and raw friend/follower/connection counts. That last is the crudest and least useful, which is why Facebook itself isn’t really built for reputation measurement. Quora, however, is a serious contender, if they get their PeopleRank algorithm right.

But there’s another massively successful Q&A site out there, one whose reputation measurement already has significant effects: StackOverflow, a problem-solving-for-programmers site cofounded by Joel Spolsky of Fog Creek Software. While Quora gets all the hype, StackOverflow quietly racks up sixteen million unique visitors a month. It’s by far the most professionally useful site on the Internet. Like many if not most developers, I use it every single workday. One of my complaints about Google is that it should, but doesn’t, catapult StackOverflow into its top five search results for almost every software topic. I like Quora a lot, but if I had to choose between the two, it’d be no choice at all. Quora is interesting; StackOverflow is important.

Lately, though, Joel, his partner Jeff Atwood, and the StackOverflow community have spun off dozens of other Q&A sites under the “StackExchange” umbrella, in an attempt to beat Quora and the like at their own game. And are they ever screwing up. Their policy is to spin off new sites built around themes suggested and approved by their existing community. So what do you get as spinoffs from a coder community? A bunch of StackOverflow subsets for super users, sysadmins, etc., and a hodgepodge of sites focused on photography, mathematics, Apple, video games, board games, role-playing games, and science fiction. Interesting? Sure. Important? Hell, no.

StackOverflow’s killer value is that it’s where people go to solve the problems they’re having at work. That’s a feature that almost all of its spinoff sites completely lack. Having a high StackOverflow reputation is a definite plus, in the software world. I’ve seen it featured on resumes, and it influences hiring decisions. Coders are canaries in the coal mine; in the years to come, members of other fields too will increasingly value their online reputations. But who beyond a vanishingly small minority will care about your reputation on “Atheism”, “Board and Card Games,” or “English Language and Usage,” to pick three new StackExchange sites?

Joel and co. should do more than pander to the enthusiasms of their existing community by letting them vet new sites. That leaves them stranded on a social peninsula only tenuously connected to the rest of the world. Before Quora eats their lunch, they should also try to build Q&A communities – and reputations – focused on other professions: law, sales, etc. (And while they’re at it, they ought to clean up their very Web 1.0 UX, and let people log in with Twitter and Facebook (edit: Correction – they support Facebook logins already. Mea culpa), to make StackExchange reputations easily exportable to other platforms.) It won’t be easy to seed them and spin them up to critical mass, but it’ll be more than worth the pain, and miles better than what they’ve got now. StackExchange could be a real contender, but first they need to change their strategy.

1Full disclosure: Setlr was incubated by my sometime clients HappyFunCorp.