I don’t know how many times I’ve been visiting a city, looking for a place to work, and have just ended up in a Starbucks. I hate working in Starbucks. But I know they have WiFi, so I go there anyway. Time and time again. But what if a service existed that showed you other options for getting work done when you’re on the go? That’s exactly what LiquidSpace is going to be.

The service, which hasn’t launched yet, can most easily be thought of an Airbnb for workplaces. Their aim is to find the best spots around a city to work from and show them to you via a location-based mobile application. But these aren’t Starbucks locations, instead they’ll be offices, business centers, lounges, and all sorts of other places that people have set up with things like WiFi, but are under-utilized at various times. LiquidSpace will help these places maximize their potential.

This idea is potentially huge for workers on the go. Certainly an aspect of it will be co-working spaces, but there will also be places more tailored for private work and/or meetings as well. It’s something that I’d probably use every day while on the road.

And LiquidSpace is going to see if there are others like me when they do their first major test of the service at the upcoming SXSW conference in Austin, Texas. The team is setting up a bunch of pop-up workspaces around the city that users will be able to reserve. These will be places like Art House, Copa, a few hotels, and even some local startup spaces. They’ll also have a “badass” bus that will roam around the city allowing people to come inside and work. Their partner, Turnstone, is helping them out with all of this.

Polaris Ventures’ Dogpatch Labs will offer similar working space during SXSW, and the LiquidSpace guys thinks that’s great and hope they can work together to fill out that space. But the key is the wide variety of spaces they’ll be opening. At the same time, the plan is still to keep the app in limited beta testing throughout the conference so they don’t get bombarded and have nothing to offer most people. We’ll work on getting some invites before the event begins to dish out here.

All of this is possible thanks to a nice seed round LiquidSpace has landed from Reid Hoffman (Greylock Discovery) and Mike Maples (Floodgate). The $1.3 million round will put Maples on the Board alongside LiquidSpace co-founders Mark Gilbreath and Doug Marinaro. 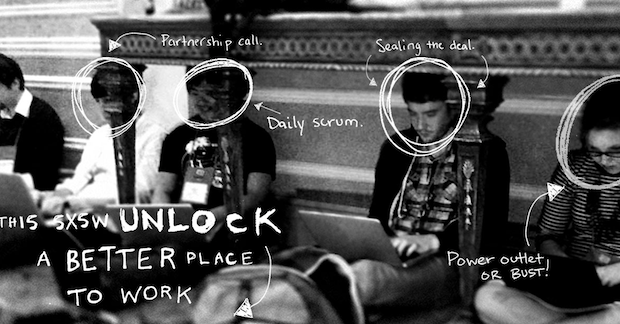