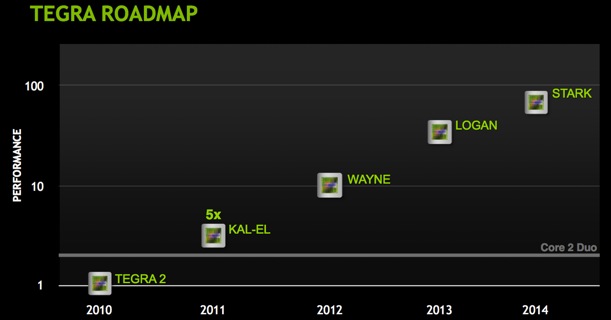 Kal-El, the quad-core megachip that Nvidia plans to come after Tegra 2, is exciting enough news, but what about the rest of the roadmap? Usually these charts reflect some internal logic and naming system, but stuff like Nehalem, Bulldozer, and Skulltrail are hard for the average geek to really relate to. Nvidia’s putting an end to that, in style.

The three other data points on their roadmap are Wayne (Batman), Logan (Wolverine), and Stark (Iron Man). The logic of the order escapes me, since although Stark is the most technological of the bunch, Batman relies quite a bit on gadgets and Wolverine is the result of high-tech experimentation in the Weapon Plus program. I’m sure quite a lot of debate could be had about the present order, but this isn’t really the venue for that.

Interestingly, the characters are from both DC and Marvel, so I’m guessing Nvidia just decided to pick a few recognizable names but not actually license the characters, because… why would they? I wouldn’t be surprised if a lawsuit gets filed, though it’s also arguable that these characters’ basic personae have entered the public domain.

Either way, good job, Nvidia. You’ve made a lot of nerds very happy, for several reasons.