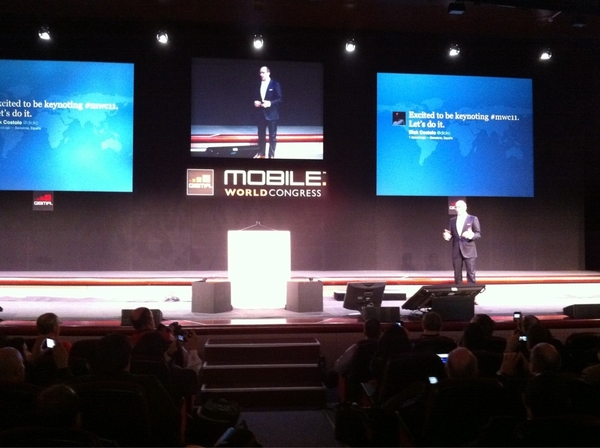 Dick Costolo started off his speech at Mobile World Congress mentioning the fact that Twitter is very multi-platform, and how that’s a huge advantage. He siad the goals going forward were that Twitter should be instantly useful and highly mainstream. Right now the experiences are dis-similar between devices, but the “experience should be the same. I shouldn’t think how to use Twitter.” In addition he said Twitter wanted to be always present – such as not having to switch applications just to tweet.

“We used to create experiences for our users but now users are creating experiences for each-other.” He cited special initiatives Twitter did with Haiti not because there was commercial benefit, but because it created value for the users. DigitaCell Haiti had proved to be the most effective promoter of Twitter during the earthquakes because it helped the aid initiative.

A Tweet which embodied a mission for the company talked about ChoppedOnion who had done their shopping and commented on the sunset. It’s that kind of simplicity and personal connection which is effectively the life-blood of Twitter.

He also revealed that 40% of all tweets are created on mobile devices. 50% of active users are active on more than one platform.

Costolo also said he wanted to air their ‘diry laundry.’ In the sense that that they had noticed that when people join Twitter they start to follow accounts that don’t follow them back. But this happens slowly. So the awareness of twitter and engagement has to become much shorter – because that builds engagement.

Today Twitter is reating a translation tool to allow the platform to be translated rapidly into other languages.

It’s also not just happening with live sporting events, but with real game shows in the UK – There are now Twitter hosts for these shows.

Producers in Hollywood are now finding people are pulling TV shows off bittorrent so they can watch shows at the same time as viewers in the US.

Costolo talked about how brands, like airlines, are ‘transacting’ with customers over Twitter, citing JetBlue and Comcast.

Regarding world events, Costolo said Al Jazeera ran an ad campaign on Twitter called #DemandAlJazeera to get TV subscribers to ask their providers to put the station on their service.

With Tunisia and Egypt he sia Twitter had been blocked for a while, but “people live in the desert because they know a way to water – and just like that people found a way back to Twitter”

But, “it’s not our place to comment” on world events, he said. “It’s not just us” or any one of these technologies changing world events. “All we care about is allowing people to instantly connect.”

Conan O’Brien selling out a show with one tweet. A joke about the BP oil spill – all are just grist to twitter’s mill (not Costolo’s words BTW, but you get the drift).

“We’ll be successful if we are instant, simple and always present.”

We could be “like the water in David Foster Wallis story and all we’ll see is each-other.”