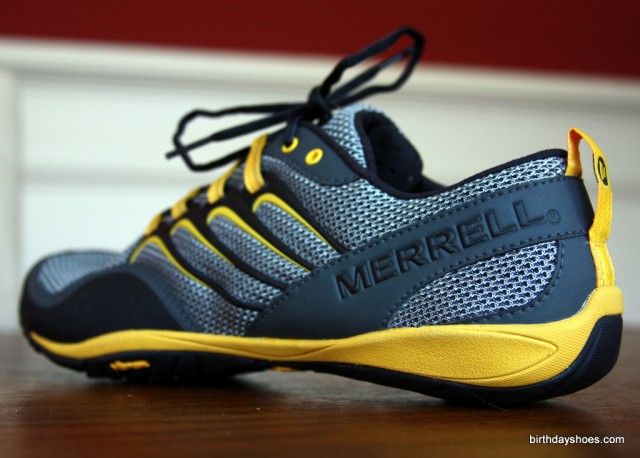 If you’re a big VFF fan, you may have been thinking about moving toward a more closed shoe for trail running but didn’t want to sacrifice the delicious toe splay offered by “real” foot gloves. Merrell just came out with a new set of trail shoes designed to mimic the benefits of VFFs and they were quite well-reviewed at our favorite site dedicated to shoes, BirthdayShoes.

I’m really liking my Merrell Barefoot Trail Gloves and recommend them as a solid contender amongst the emerging options in the minimalist footwear category — they are certainly top of mind in the non-five toed shoes category! That said, it’s important to keep in mind that every foot is different just as every person is different — there’s a good reason for the cliche “if the shoe fits, wear it!”

The sole, while not having five separated toes like the KSO Trek, is reminiscent of the Trek in that the end of the sole has four ridged, implied “toes” (see pic at right). These ridges provide some added traction — particularly when ascending steep uphill climbs on the trail. Elsewhere on the sole you’ve got some decent knobbing that lends to overall traction on the trail. Since the sole is made by Vibram, and ssuming you’re running form is efficient, which is to say that it minimizes friction, you could probably expect these soles to last quite a long time. I’ve worn my Trail Gloves a good bit for walking, some road running, and trail running over the past two months; thus far, the soles show no appreciable wear.

The Merrell Barefoots are zero-drop shoes meaning the heel is not elevated. My handy calipers measure the forefoot thickness at a smidge over 10mm — same at the heel. For reference, my KSO Treks are more around 8-9mm. Compare the Merrell Barefoot Trail Gloves’ zero-drop to the NB Minimus Trail, which has a 4mm heel-to-toe drop and is overall a bit thicker-soled at 15mm or so at the heel (The New Balance NB Minimus Trail is slated for release in March 2011).