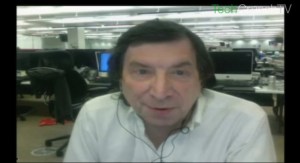 “Freedom of speech is being denied [to] Luke Harding while Wikileaks and Julian are getting in to bed with these dictators; these enemies of freedom of speech…” – David Leigh

The book is full of frankly incredible revelations about the paper’s relationship with Wikileaks and Julian Assange. So incredible, in fact, that I wanted to ask the authors more about them.

On Thursday morning, I spoke to Leigh (who is based in London) via Skype. We talked about Assange, the Wikileaks revalations, whether Assange is a journalist or “just an IT guy”, the difference between the “mainstream media” and wiki journalism, Assange’s new-found friendship with the Russian government and a whole lot more.

The full video is below, followed by a few of my favourite quotes from Leigh…

“As an IT guy [Assange] is a genius… as a journalist he’s an amateur… and a reckless amateur.”

“You put everything out there and the citizen journalists make sense of it… unfortunately none of that happened.”

…on Assange’s claims that the book is a smear:

“I’d like Julian to sit in front of me and say he didn’t say [that he didn’t care if Wikileaks caused informants to be killed]. He did say that.”

“[Assange] doesn’t have blood on his hands as far as I know… The point of this War Log stuff was to demonstrate how many civilian casualties there have been… because America decided to have two wars.”

…on the digital divide:

“For middle aged mainstream journalists like me, we had a lot to learn from Julian.”

…on Wikileaks vs Mainstream Journalism:

“When you look at those cables you certainly see America as a superpower throwing its weight around, maneuvering, sometimes bullying people. A lot of the time [though] you see it failing to get its own way, trying to do its best in a very difficult and dangerous world, full of people who are much more violent and vicious and alarming than the US State Department who are a lot of quite civilised diplomats.”

…on Assange “palling up” with the Russians:

“I’m quite angry with Julian about this. He’s being reckless and opportunistic. Because America is after him and because Sarah Palin wants him hunted down like Osama Bin Laden and so forth, he’s turning round to the Russians who are quite enjoying the discomfiture of the United States… he’s palling up with them and giving material to very unsuitable people.”

“[We have this] bizarre spectacle where Luke Harding is chucked out of Russia for quoting Wikileaks’ cables saying it’s a mafia state, so freedom of speech is being denied [to] Luke Harding while Wikileaks and Julian are getting in to bed with these dictators; these enemies of freedom of speech… This shows how shallow and reckless he can be as an amateur journalist.”

‘Wikileaks – Inside Julian Assange’s War on Secrecy‘ by David Leigh and Luke Harding is available worldwide now (US, UK)