Judging by Demand Media’s successful IPO, HuffPo getting bought for $315 million and Wikimedia raising over $16 million from Wikipedia users and fans, it appears online content is red hot (again).

So when a company asks me to have a look at their online article directory, which they say gets visited by more than 20 million unique users every month, I pay attention.

Remember, for all the attention blogs like The Huffington Post receive, the network was visited by 28 million unique monthly visitors last month, up from 24,5 million in December 2010, so clearly said company – ArticlesBase – is playing among the big boys traffic-wise.

Even more surprising are those stats when you look at the size of the company: only 11 employees, but ArticlesBase is already – self-reportedly – raking in about $500,000 a month, at a 80% profit margin. And you’ve probably never even heard of it.

A global library of articles, too, with over 3 million articles in six different languages (English, Portuguese, Russian, Spanish, French and Hebrew), and growing at 5,000 new articles per day.

It has a how-to video section with over 175,000 videos and a recently launched Q&A section with more than 100,000 questions. Get this: ArticlesBase says more about 500,000 contributors add thousands of new articles on a daily basis, and they don’t even get paid.

All they get from contributing to the site is, essentially, attribution and traffic. No monetary compensation per article, letter or pages viewed. Nada. Zip.

The Israeli startup behind the site deems ArticlesBase a destination site, with the majority of traffic coming from organic search, but claims it thrives on high-quality content and no SEO trickery. Looking at the available content, I seriously doubt that, though.

Some random articles found on the site:

Myspace Backgrounds According to your Wishes

Not exactly Pulitzer material there, but obviously that’s not the goal – this is a content farm business if I ever saw one. Again, their contributors do this for free, so it’d be rather foolish to expect to find a lot of high-quality content on ArticlesBase.

Still, you may not like it, but it’s quite a nice little business they’ve got there.

Think about it: a completely bootstrapped startup, a team of 11 employees and an annual revenue rate of about $6 million. I can think of plenty of startups, even venture capital-backed ones, that would love to be able to report such numbers. 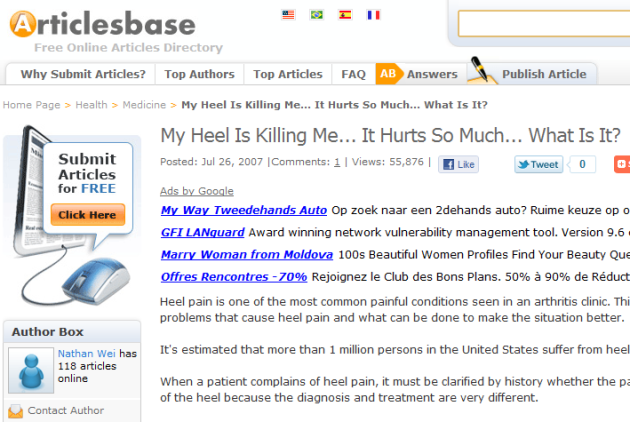