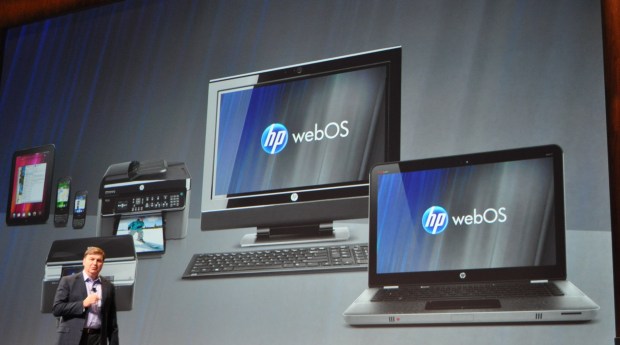 HP’s Todd Bradley just went on stage at the webOS event and said: “I’m excited to announce that we’re bringing webOS to the device that has the biggest reach of all: the personal computer.” Now, let’s not all go insane here. We’re pretty sure that what he means is webOS will be flavoring HP products, probably taking over the role of TouchSmart in their multi-touch all-in-one PCs. But hey, they just put out a phone with a 2.6-inch screen. Maybe HP is going all out.

It makes sense to have a single layer that covers your whole computing experience, and if you’re HP, you can just wave your magic worldwide wand and say “make it so.” In this case it looks like they want to make sure that your phone, tablet, printer, and PC are all speaking the same language and have standards of connection.

Presumably we’ll see webOS interface elements in HP-branded stuff, webOS-like buttons on fullscreen applications, easy sharing via the Touch2Share “bump” feature, and so on. Could be interesting, but right now it’s mostly just being hinted at. I’m sure we’ll get more info at a future event.