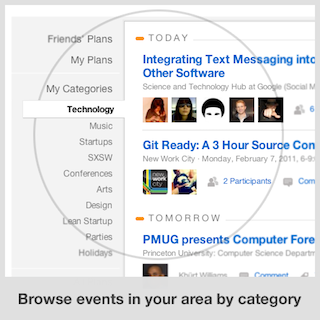 At launch, all startups need a direction. At the same time, those most open to tweaking that direction as a service grows often have a better chance at finding a path to success. Some may call this a “pivot”, but sometimes it’s less of a change than that. Sometimes it’s just focusing more on certain aspects of your service rather than others based on how users are naturally using it. Plancast is currently undergoing such a metamorphosis.

When they originally launched in November of 2009, co-founder Mark Hendrickson (a TechCrunch alum) thought the best way to describe his service in a manner that people would quickly understand was as a “Foursquare for the future“. “Our emphasis was on the user’s ability to share that type of information with a familiar audience who’d want the basics (place, time, etc), might want to join in, and perhaps start a conversation around it. We shied away from considering ourselves an “events” service because we wanted to facilitate a long tail of plans, including travel and grabbing drinks, that could lead to serendipity,” Hendrickson says, looking back. But again, that was before anyone was really using the service. Now that it has been live for over a year, Plancast has learned quite a bit about what their users want. And what they want is, in fact, events.

“The vast majority of plans being shared corresponded to events, especially larger ones, and not the ‘long tail’of more personal affairs,” Hendrickson says. On top of that, like so many other services, Plancast was seeing that a very vocal minority was adding most of the plans to the system, while the passive majority of users would simply look at those events and possibly state their intention to go via Plancast’s “count me in” button. In talking to regular users, Hendrickson says they learned that, “they loved us for our social event curation much more than anything else.” 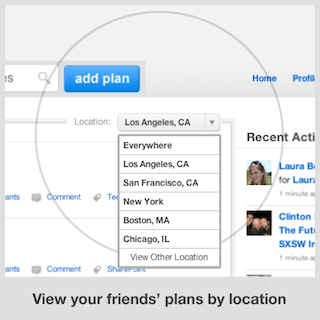 And a site revamp which will go live to all today puts a focus on just that: social event discovery.

Hendrickson says they feel that this type of discovery depends on three main things: social connections, location, and interests. When Plancast launched, they already had the first one in place, thanks to a nice implementation of Facebook Connect, and later a robust Twitter integration as well. A suggested users list bulked their social graph up a bit as well.

But Hendrickson understood that the latter two of those three things needed some work on Plancast. So the revamp today further emphasizes both location and interests. “We’ve developed technology that allows us to surface the plans in our system based on their location and categorization. The new homepage is designed to highlight these capabilities, with a new tab system on the left that lets you choose to view, say, all technology events in San Francisco or all music events in New York,” Hendrickson says.  The new design allows people to pick which categories they care about and quickly see those. And users can also now filter friends’ plans by location, a feature which Hendrickson says was their most-requested.

Each Plancast event now can also have a “category”. And each of these categories also now has its own page, which can be subscribed to. For example, here’s the SXSW page, and here’s the page for startup events. Again, all of this is about surfacing event information that is most relevant to your tastes. 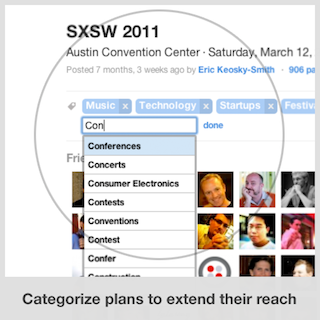 “Our long-term goal with all of this is to become the go-to events service on the web, with the most comprehensive listings, the most effective signal-to-noise filtering, and the best overall user experience,” Hendrickson says. While there is competition out there, Hendrickson feels that none of them nail the social discovery aspect, nor are they mainly sourced by people actually attending events. That’s Plancast’s wheelhouse.

Going forward, the plan is for Plancast to get better at surfacing particularly hot events. And there are plans for weekly event digests based on users’ event preferences. “Basically, we want to make it as easy as possible for users to get set up and start hearing about quality events, regardless of whether they choose to visit the site regularly,” Hendrickson notes.