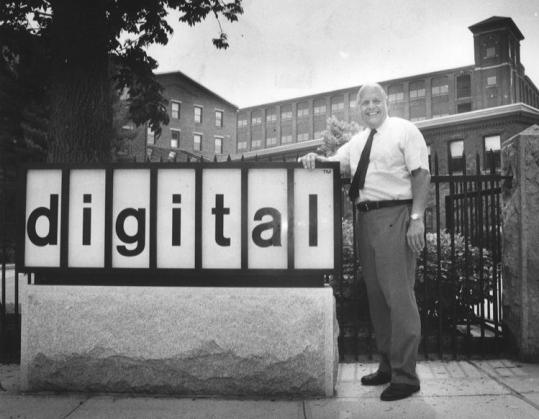 Last night, one of the high-tech industry’s pioneers, Ken Olsen, who co-founded Digital Equipment Corporation, passed away. Most of you who only discovered computers in the 1990’s have never heard of him, but he is in fact a legend, and he impacted my life in a tremendous way.

Two years ago, I added this comment on a post by Mike about SGN founder Shervin Pishevar’s email about entrepreneurship. I’m reprinting it below (with some slight edits):

A year before I was born—I am 34 today—my father David, joined Digital Equipment Corporation (DEC), a company which had a profound effect on my entire family and is responsible for where I am today with my life.

DEC, or ‘Digital’ as it was commonly referred to in Israel, was an extraordinary company by any respect, even more so in Israel back in those days. I remember my dad explaining to people he used “email” (this was the late seventies) only to receive a blank stare—mind you, it was still an amazing feat when regular mail worked back then, let alone this “electronic mail”.

I believe I heard Marc Andreessen say that DEC was the first ever venture capital investment. It was a company that for many years was second only to IBM. A company that back in 1987 used the Queen Elizabeth II as a floating hotel for its expo, Decworld. The same company that had the biggest email network in the world, before the Internet went mainstream in the mid-90’s.

My dad always made sure there was a computer in my home, always. And because they were DEC, they all had modems attached. In the world that I grew up in “connectivity” as we call it these days was a given. 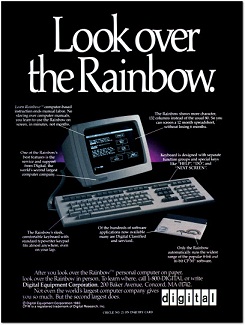 In 1984 my dad took a relocation gig and my family moved to Boston. When I look back at the three years we spent there, two memories in particular come up…. The first, my dad taking me to Toys R’ Us on my first day in the States. I was so overwhelmed that I left without buying anything—I had never before seen so many toys. The second memory was sitting with my dad in our picture perfect American home in front of a Rainbow 100. He initiated a chat session with a colleague over at DEC Israel, and that was my first ever chat session. There I was in 1984, a kid who couldn’t walk out of Toys R’ Us with a toy, but totally comprehended the notion of an Intranet, routers, servers and modems.

Quite funny in retrospect.

I also spent those three years in Boston watching a great deal of television, sucking in and processing every piece of Americana that came my way.

This in turn accelerated my grasp of the English language and I ended up being ejected out of ESL quicker than anyone anticipated.

In 1991 my dad was asked to go help set up DEC Hungary. For the next three years we had a front row seat in watching a country dive into capitalism. DEC paid for my two siblings and I to go to a private school, namely, the American International School of Budapest. It was money well spent as we gained a deep appreciation of other cultures and different perspectives.

In Hungary, my dad arranged for us to have two machines from DEC, one a desktop at home, the other, a laptop for me. This was 1991 and I was 15, sitting in class with a laptop. So on top of the concept of connectivity, which I already embraced before I knew how to spell, I also grew up with the practicality of computer portability.

After Hungary, my family then moved to Zurich and I flew to the States for my undergrad degree. There’s no question that without my dad’s career in DEC, he would not have been able to afford this.

I returned to Israel in 2000 and started working in hi-tech. It’s the only thing I know how to do really.

Fast forward to 2011… I am now a father of two living in Israel, covering Israeli startups for TechCrunch. I am Head of Products at Soluto where we have the humble mission of making a billion PC users happy. I’ve also become some sort of social butterfly in the local startup scene, where I naturally gravitate around entrepreneurs, investors, developers and designers.

I’ve been very fortunate in my life and it’s due to two people… The first is my dad, David Carthy, who immigrated from Romania to Israel in 1960. His well-to-do family lost everything and found itself in a tin shack, but within two decades his own family was globetrotting and getting quality foreign educations. His ambition and determination certainly had a lot to do with it, but they wouldn’t have sufficed without him having hitched his wagon to DEC.

The second is Ken Olsen. From everything I’ve known and read about him, he was a humble man. An engineer that set out to create a technology company, and arguably became one of the most important American entrepreneurs of the past century. He most probably didn’t set out to create a company that would have such an impact on people’s life, as it did on mine. But here I am.

More and more these days we are vocalizing our cynicism about companies like Apple, Google, and Facebook. We argue about their definition of evil, their interpretation of ‘open’, and their manipulation of ‘closed’. But underneath it all, these are amazing companies that are impacting our lives, and shaping kids, for the better.

This, I’ve learned, is the American Way. And to me, no one embodies it like a guy I never met, but who I can’t imagine my life without.