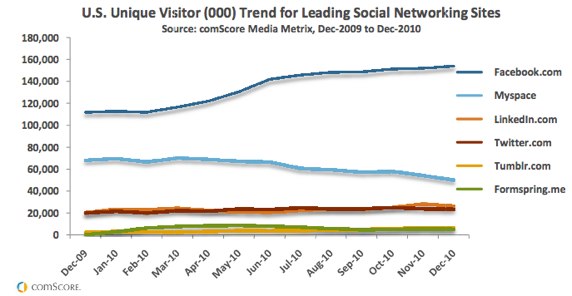 With 600 million users, it’s no secret Facebook is dominating social networking. And recent comScore data only reinforces the social network’s staggering growth. For example, Facebook accounted for 10 percent of U.S. page views in 2010, while three out of every ten Internet sessions included a visit to the site.

In December, Facebook’s U.S. audience grew to 153.9 million, an increase of 38 percent from the same month in 2009, and the social network became the 4th most visited web property. The total time spent on Facebook in December 2010 vs December 2009 surged 79 percent to 49.4 billion minutes. Total page views grew 71 percent to 76.8 billion.

In terms of unique visitors MySpace came in second in December, but its audience declined 27 percent and total time spent on the site declined 50 percent. Professional social network LinkedIn emerged as the third largest site in the category with 26.6 million visitors in December 2010, which is up 30 percent from the previous year. Twitter saw 23.6 million unique visitors in December, up 18 percent from 2009. And Tumblr.com’s traffic surged 168 percent to 6.7 million
monthly visitors.

Facebook has even surpassed Google, Yahoo and Microsoft in terms of time spent on each site, according to comScore’s data. Hitwise’s data also showed that Facebook was the most visited website in the US in 2010, beating out Google and others.

Although the data isn’t surprising, Facebook’s command over internet users time on the web is impressive. No wonder advertisers are flocking to the social network to reach users. 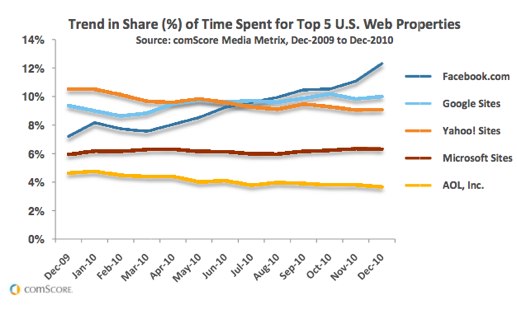