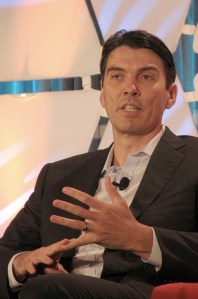 At midnight, AOL announced that it will buy the Huffington Post for $315 million. Below is the internal memo AOL CEO Tim Armstrong sent to all AOL employees (except us, they don’t trust us with anything) about the transaction. In between the corporate speak, he points out that a combined AOL and Huffington Post will have 117 million unduplicated unique visitors per month in the U.S., and outlines the new organizational structure with Arianna Huffington as Editor In Chief of all of AOL’s media properties, including TechCrunch. AOL exec Jon Brod will be overseeing the integration from an operational perspective on the AOL side.

We are taking another major step in the comeback of AOL. Today we are announcing that we have agreed to acquire The Huffington Post, one of the most exciting, influential, and fastest growing properties on the Internet. We believe in brands, quality journalism, and the positive role of communities in the world—The Huffington Post shares our values and the combination of the two companies will create the premier global and local media company on the Internet.

Co-founded six years ago by Arianna Huffington and Ken Lerer, The Huffington Post has grown to become an industry leader—one of the Web’s most popular and innovative sources of online news, commentary, and information. Arianna and team have created a brand and a destination that focuses on the consumer experience. By combining The Huffington Post with AOL’s network of sites, thriving video offerings, local expertise and enormous reach, we will create a company that is laser-focused on serving our audiences across every platform imaginable – social, local, video, mobile and tablet.

The Huffington Post is core to our strategy and our 80:80:80 focus – 80% of domestic spending is done by women, 80% of commerce happens locally and 80% of considered purchases are driven by influencers. The influencer part of the strategy is important and will be potent.

In the local area, the combination of the two companies will create a scaled connection between global and local communities on one platform. This will create a new way for people to get local and global information in a timely and entertaining way.

The Huffington Post will join the family of AOL Brands that are destinations for an influencer audience, brands like TechCrunch, Engadget, AutoBlog, and Moviefone. Uniquely, The Huffington Post is the platform for influential people — the people that drive trends, commerce, politics, entertainment, news, and information. Adding this strategic platform to our already strong network of sites, including the AOL homepage, has the potential to make AOL the most influential company in the content space.

Arianna Huffington is one of the most successful entrepreneurs in the Internet space and someone that is even more successful in building communities and relationships in every corner of the globe. The Huffington Post and Arianna have created a company that has partnered with the most successful and well-known leaders in all aspects of society that touch important topics to give consumers direct access to the most influential decision makers and community leaders.

This acquisition will create a high-quality and diverse digital ecosystem encompassing local, national and international news, politics, entertainment, technology, fashion, sports, health, personal finance, green, lifestyle, the arts and more. This deal will combine the amazing talent at AOL with the innovative and talented staff of The Huffington Post. Here are just a few high-level points around what this deal brings to market:

In the local area, the combination of the two companies will create a premier global/local syndication network at scale. This will create a new way for people to get local and global information in a timely, informative and entertaining way.

To maximize the strategic advantage of this great deal, we will be creating a new group at AOL called The Huffington Post Media Group. Within this group will be AOL Media, AOL Local & Mapping, AOL Search and our new friends at The Huffington Post. We will continue operating the towns structure, AOL.com and HuffingtonPost.com.

I’m thrilled to announce that Arianna Huffington will join AOL’s executive team as President and Editor in Chief of The Huffington Post Media Group. We have asked Jon Brod to lead the overall operational integration on the AOL side of the combined entities. Jon will lead the local group integration and work closely with David Eun and the teams in AOL Media. We will work quickly with The Huffington Post to create a combined organizational design to coincide with the deal closing. While we wait for the required regulatory reviews to be completed and the transaction to close before implementing the design, we will move very quickly to plan the details of the integration of the two companies. To this end, we will announce the new organizational structure as soon as possible.

In the meantime, we will continue creating great content and products for our consumers within the town structure and stay laser-focused on the aggressive goals we have set for our winter luge. We are on the right track and will continue our weekly operating cadence and town structure to drive successful results against our company goals.

Here’s a special message for all of you we taped to welcome The Huffington Post and Arianna to our AOL Family:

And of course we wanted to welcome Arianna to our “You’ve Got” video of the day—check her out on AOL.com.

We will be holding a company all hands meeting to address your questions related to today’s exciting news. We will video conference from our New York office on the 6th Floor at 9:30 AM ET and will be joined by Arianna Huffington and key executives from her organization. We will also be holding a call for our west coast offices at 2:00 PM ET and for our Patch offices at 2:45 PM ET. See below for meeting info (conference rooms will be sent out shortly).

AOL is playing to win…and The Huffington Post and AOL will occupy a unique place in the future of the Internet. Let’s go get it done.