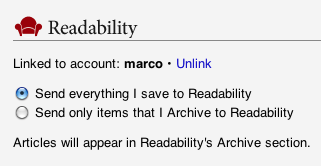 Personally, I think the concept behind Readability is pretty awesome. It gives you a way to read all your favorite articles on the web without all of the clutter of the web — meaning, mainly, ads. And the recently-launched payment component is even more interesting because it gives you a way to pay back (in a very small way) your favorite writers/publications that you often read on the web. But as one such writer who works for one such publication, clearly I’m biased. I realize that this idea isn’t for everyone. And it’s going to be a fairly hard sell for some people. But that sell may have just gotten a little easier.

When Readability re-launched last week, they noted a partnership with popular bookmarking service Instapaper. The main component of this integration was set to be a Readability mobile application that Instapaper’s Marco Arment made (and will release soon) in Instapaper’s image. This is great for Readability since Instapaper is already a hugely popular app on the iOS platform. But a small bit of news today is even better. As Arment announced today on the Instapaper blog, you can now send you Instapaper logs to Readability.

What this means is that you can use the payment element of Readability without having to really use Readability at all (beyond the initial payment set up). So if you like the idea of Readability but still prefer to use Instapaper, that’s fine — this gives you the best of both worlds.

And there’s an option when you link your accounts to send everything you save on Instapaper to Readability or to only send items you archive to Readability. That’s also interesting. It gives you a way to selectively pay certain publishers/authors.

You’ll be directly supporting the sites that you save to Instapaper, automatically.

Again, this won’t be for everyone. And some people will wonder why you would do this when you can just use Instapaper for free? Well, you certainly don’t have to. But if you’ve ever felt the desire to give a little something back, this is an easy way using a service that’s already pretty popular.

Readability allows you to contribute as little as $5 a month, of which, 70 percent goes directly to writers/publishers (split up over all the various ones you’ve read that month, obviously). It’s certainly a model that could fall flat — but if it hits, it could be a nice little bonus for writers on the web outside of the traditional ad-based model.

Instapaper has also been testing a micro-payment subscription model as well.