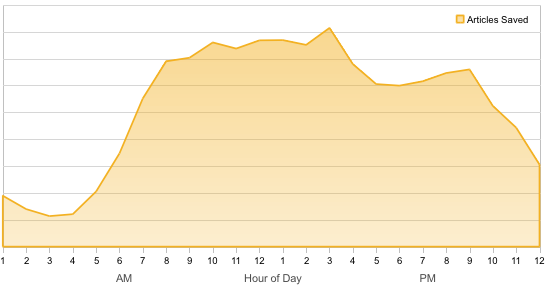 One of the reasons bookmarking apps like Read It Later and Instapaper are becoming so popular is because we are inundated with news and interesting links all day long, but have no time to read them. But just as DVRs helps us shift our TV viewing to better fit our own schedules, these apps helps us time shift our online reading. And according to some data put out earlier this month by Read It Later, it looks like the iPad is becoming the time-shifting reading device of choice.

Read It Later offers bookmarking apps for computers, mobile phones and iPads. It looked at 100 million articles saved by its users. The chart above shows the amount of saving activity by time of day. It is pretty consistent throughout waking hours, as you’s expect from people who are constantly bombarded with new information. It just never stops. Below is a chart showing when iPad users actually end up reading what they saved. As you can see, the time reserved for reading is shifted all the way to the right, with the sweet spot being between 7 PM and 11 PM at night. This suggests that iPad usage is competing with primetime TV for people’s attention (or that they watching TV with iPad in hand, or shifting their TV viewing to other times). 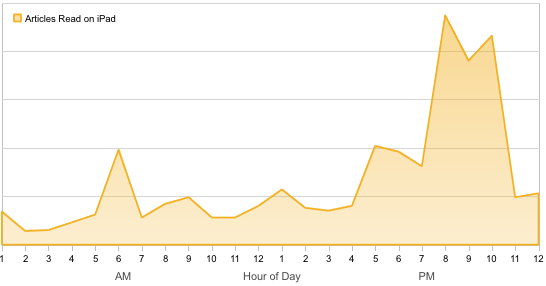 People who end up reading the articles they saved on their computers, don’t shift their reading times so far to the right. They tend to read throughout the day whenever they have time, which makes sense for people who sit in front of computers all day. They read saved stuff whenever they have a free moment. The chart below shows an overlay of articles read on computers by iPad owners with articles led by people non-iPad owners in gray in the background. iPad owners also read their saved articles on their computers, but mostly in the middle of the day. As they get more downtime, they shift to their iPads. 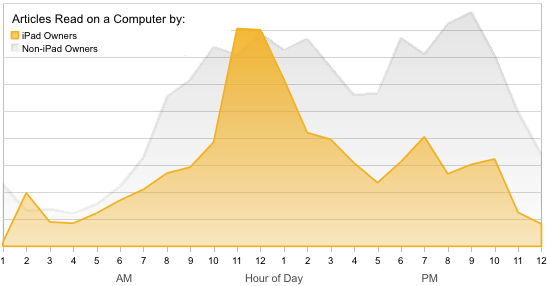 If you look at when users read saved articles on their iPhones, the graph is more spiky around commutes, early morning, and late evening. The iPhone is an interstitial reading device, filling in the moments in between activities. 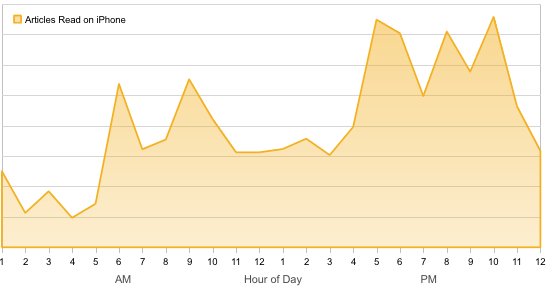