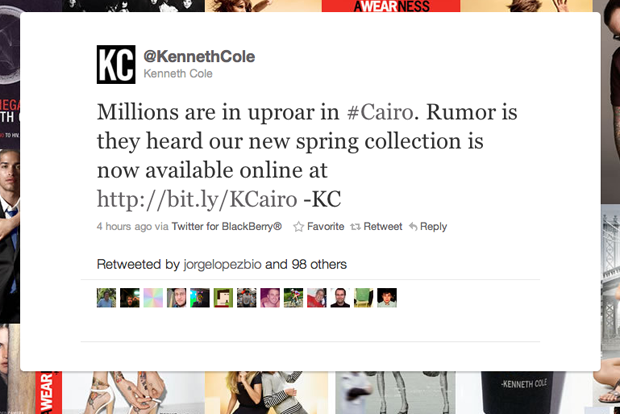 “We had hoped this ad would change the world but we blue it.”

Finally someone sees the unrest in Egypt for the marketing opportunity it truly is! I’ve now spent a couple hours reeling from how insensitive it was for designer Kenneth Cole to use #Cairo to publicize the availability of his spring collection online when Egypt is erupting in violence and millions were cut off from Internet communication for days.

My first thought here was, uh oh, some PR person is getting fired for this, the most egregious case of hashtag surfing fail I’ve ever seen. But apparently the tweet came from Cole himself, signed “-KC.”

Married to former NY Governor Mario Cuomo’s daughter Maria, Kenneth Cole feels entitled to publish consistently superfical ads that dabble in politics, most notably one that equated abortion to purses, “Dear pro-life advocates, Isn’t it a woman’s right to choose? After all, she’s the one carrying it.”

Econsultancy points out that furniture maker Habitat pulled a similar move when it hopped on the hashtags #Iran and #Mousavi in order to blatantly advertise its website during the Iran election protests. It ended up firing the intern responsible and deleting the account.

What did Kenneth Cole do? He sent out this pithy apology tweet.

“We weren’t intending to make light of a serious situation.” Bullshit. Yes, yes you were. That’s exactly what you were doing. As of yet the media fiasco, estimated 1500 negative retweets an hour and an @KennethColePR spoof account haven’t affected the company’s stock price. But trust me they will. They will.

Update: Kenneth Cole has deleted the original tweet, offering this apology on his Facebook page, in essence admitting that maybe it was too soon for Egypt jokes.

“I apologize to everyone who was offended by my insensitive tweet about the situation in Egypt. I’ve dedicated my life to raising awareness about serious social issues, and in hindsight my attempt at humor regarding a nation liberating themselves against oppression was poorly timed and absolutely inappropriate.”