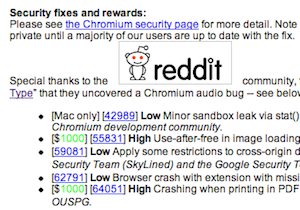 Google has made a big deal recently about not making a big deal about the version numbers of Chrome. “It’s just a number” is the basic take these days. In fact, they can barely be even bothered to announce them at all sometimes. But today, they did actually take some time to acknowledge the latest version — and a funny partner who made it all possible.

Google has officially rolled out Chrome 9, meaning the stable version of the browser has been updated to that iteration. They don’t make any mention of the number in the blog post about the update, but trust me, it’s version 9. Instead, Google focuses on the three new major features available to all in this build: WebGL, Chrome Instant, and the Chrome Web Store.

Many users will already be familiar with all of those as they’ve been on the beta builds of Chrome for a while, and the dev builds longer before that. But still, each is worth noting as all three are now a pretty integral part of the Chrome experience. WebGL brings hardware-accelerated 3D graphics support. Chrome Instant brings Google Instant support to the Omnibox. And the Chrome Web Store is part of Google plans to push web apps farther.

But the more humorous part of the release comes from the Google Chrome Releases blog post. This post details the bug fixes that have come in Chrome 9. And in it, Google gives a special shout-out to the Reddit community for pointing out one critical bug. As Google notes:

Special thanks to the Reddit community, for playing so much of the game “Z-Type” that they uncovered a Chromium audio bug — see below!

Below, they detail the bug:

[69195] Critical Race condition in audio handling. Credit to the gamers of Reddit!

So there you go, while it wasn’t an “elite” bug or even a “l33t” one, it’s fun to see Google given credit to another service for pointing out their flaws.