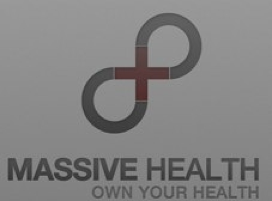 In the same mobile health space as apps like Nike + and Jane McGonigal’s Social Chocolate, Massive Health aims to bring “the kind of innovation we expect from the Internet world to healthcare.” The co-founders write on their blog that they aim to incorporate elements of crowd-sourcing, game mechanics and social networking into helping someone stay healthy, “We are talking about tight feedback loops and deep insight into the interface which is your body.”

Co-founder Raskin says that the company is still in stealth because trying to change people’s behavior is a really hard problem and they don’t want to set expectations too high.

What he does tell us is that they will be focusing on mobile apps as most of what they are doing, “There are many companies out there in the wellness space, what we’re trying to do is take all the knowledge of of big data and data geekery, of social and social gaming, of fantastic consumer products and apply it to health problems, to the 15% of patients that are costing the US health care system 90% of its costs.”

Massive Health will be using the money for new hires and building out product, “Healthcare moves more slowly than most companies in tech do and we want to make sure we have the leeway to build great product.”

The company plans to come out of stealth sometime this year.