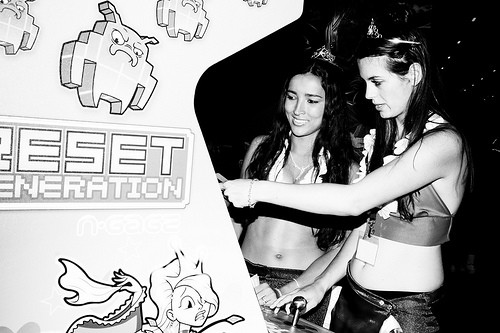 Here’s an interesting study: the effect video games have on kids’ happiness. BYU surveyed a couple hundred families, and asked to tell about their children’s video game use along with school performance and behavior. The results are kind of interesting: it turns out that young girls who spent more time playing games with their dads are happier and better-behaved.

Makes sense, right? Spending any amount of time playing with your kids can be beneficial — I think it’s called parenting? Not only were the girls more happy, they also felt more connected to their families, were less aggressive and were less likely to be depressed.

The flip side of the study is that there was no effect on boys. The explanation is that boys play too many video games as it is, with and without their parents. Devoting most of their time to the video games had the boys missing out on homework and other important activities. And of course, they found playing violent games did make them more aggressive. Oh well, back to the drawing board.

In case you were wondering what games had such a positive effect on little girls, it was Mario Kart, Wii Sport and Guitar Hero. No Dead Space, then.