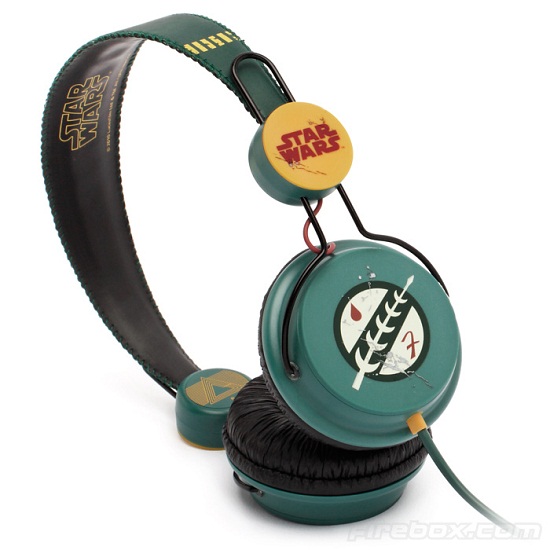 While Boba Fett obviously has an air of “danger and mystery,” did you know that he also enjoyed Jazz and early Dixieland? That’s right: Jango Fett, whose real name was Bruce Fitzgerald Fett and was born in Aukland, wasn’t called Jango for nothing (he dropped the silent D because they didn’t have that particular consonant combination on his adopted planet of Kamino), and his son, Boba, took on some of his father’s latent genetic predilections including a love of the Gypsy Troubadour’s jangling guitar. He also slightly color blind (low blue perception) and a bit of a lisp, which is why he didn’t talk much.

Now you can enjoy music the same way Boba did with these $55 Boba Fett headphones, a pair of cans specially tuned to Boba’s specific hearing range. You can hear all of Satchmo’s highs and Miles’ lows and even hear Woody Allen’s clarinet at least 50 times better than you would on normal, non-clone headphones. Plus you’ll be able to understand what that one tall and skinny robotic bounty hunter was saying on the Death Star, which I suspect was something about hitting the Blue Note after picking up Han Solo.