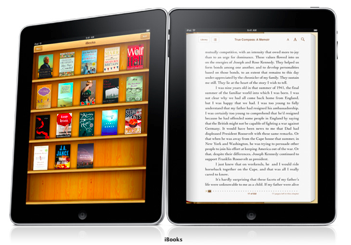 Last night the New York Times published a report stating that Sony’s E-Reader application had been rejected from Apple’s App Store, because it used a transaction system other than Apple’s In-App Payments. What’s worse, Apple was apparently blocking applications from downloading content that had been purchased outside the application — which could spell bad news for Amazon’s Kindle platform.

Now an Apple spokesperson has given us this statement:

“We have not changed our developer terms or guidelines. We are now requiring that if an app offers customers the ability to purchase books outside of the app, that the same option is also available to customers from within the app with in-app purchase.”

At first glance it looks like the NYT article was simply mistaken — Apple is saying that its terms and guidelines are the same. Except now it’s apparently choosing a different way to actually enforce those terms, which makes the report seem accurate after all.

The most relevant passage from Apple’s developer guidelines — which were only published in September, mind you — appears to be section 11.2, which states:

Apps utilizing a system other than the In App Purchase API (IAP) to purchase content, functionality, or services in an app will be rejected.

Now, Amazon’s Kindle app doesn’t conduct its purchases through the app itself — users are instead kicked off to a browser where they actually buy their books, and that content is then synced to the Kindle app. Apple’s rule is worded vaguely enough that it can claim this workaround is in violation of the guidelines. But it obviously hasn’t been enforced like this before now, so the notion that nothing has changed is clearly false.

It also doesn’t make a whole lot of sense from the user’s perspective. Apple is effectively telling developers that they can offer two purchase flows for content: one through the browser, and another via in-app purchases. Apple is obviously assuming people will prefer the latter because it’s quicker and simply requires the user to enter their Apple password. But developers have an incentive to push users toward the browser flow so that they don’t have to give Apple a 30% cut of each purchase. Which could mean we start seeing some bizarre checkout flows that are anything but user friendly.

Either way, this is bad news for Amazon and other apps that have relied on the browser to sell content. Developers selling virtual goods can afford to hand that 30% cut to Apple because it’s basically free money. But when you’re dealing with premium content, handing over that 30% is huge.