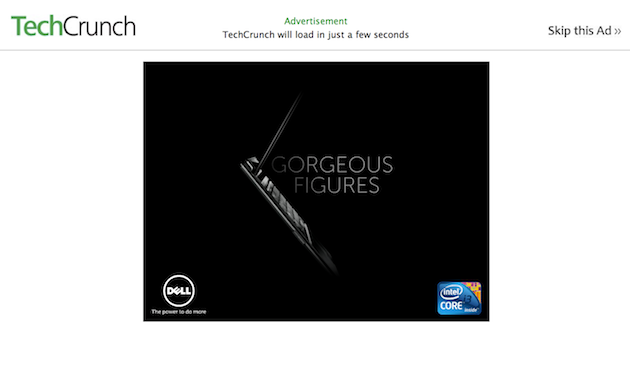 Hey, if I dish it out, I have to be able to take it, too. And take it today I have. We’ve put up this ridiculous interstitial ad here on TechCrunch that appears the first time you visit the site.

It’s an ad for Dell. I like Dell, and before I went to Macs I mostly bought their computers. But the ad sucks.

Anecdotally I’ve heard that interstitial ads perform well because they don’t give the visitor any choice. They view the ad, then they get on the site. Lots of impressions and clicks and stuff that the sales guys love.

But like you I don’t like them. I tend to stop visiting sites that show them. They aren’t as bad as the ridiculous ads that float over the text you’re trying to read, but they are in the same ballpark.

They also slow the site down significantly.

In the past our sales guys have brought up these kinds of ads, and our CEO Heather has shot them down. In this case I’m not sure who’s responsible. AOL has now taken over some of our ad sales, I believe. And our awesome sales team (who has to put up with stuff like this) is handling the rest. I think so anyway, normally I don’t pay much attention to that side of the business. So far my internal requests for more information have been ignored.

Whoever did it, I’m going to try to stop it. Which will probably involve six hours of internal meetings and at least one power point deck. So at least you know that it’s going to cause me a lot more pain than it’s causing you.

You’ve got that going for you, which is nice.