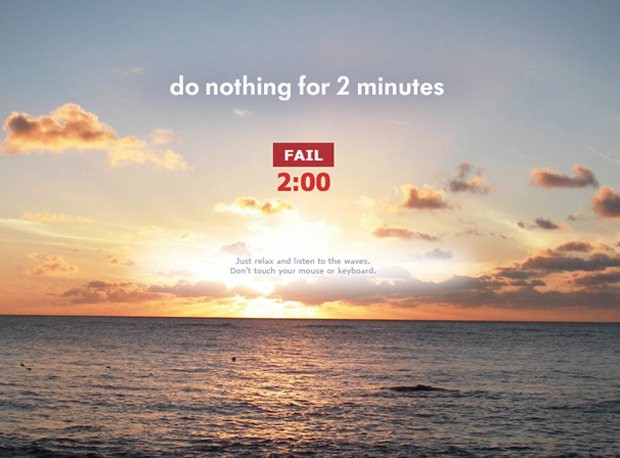 PopJam CEO Alex Tew, the guy behind the internet phenomenon Million Dollar Homepage, has now gone the opposite extreme. Along with developer Ben Dowling, he has created Do Nothing For 2 Minutes, a site whose purpose is pretty self-explanatory.

While MDH was a celebration in online excess, DNF2M is a zen treatise on computing and a challenge. Can you sit in front of your computer and not touch your mouse or keyboard for a measly two minutes? It’s actually not as easy as it sounds, especially if you work in a web-intensive field.

Says Tew on the inspiration behind the site, which brought in 20,000 uniques 8 hours after launch.

“I had been thinking how we spend every waking minute of the day with access to an unlimited supply of information, to the point of information overload. i also read somewhere that there is evidence that our brains are being re-wired by the internet, because we get a little dopamine kick every time we check our e-mail or Twitter or Facebook and there’s a new update. So we’re all developing a bit of ADD. which is probably not great in terms of being productive.”

Tew also holds that the key difference in the way we interact online between when he built MDH in 2005 is that the “viral has gone viral” (infinite loop!), “Ideas spread even faster because of social media. Whereas before, the distribution power lay more with the news media and blogs back in 2005. If I had done MDH today, I might have made $1m in 4 weeks rather than 4 months.”