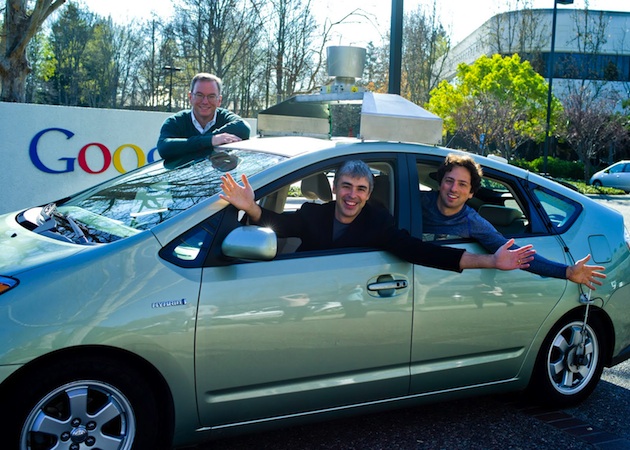 Late last summer we were ready to break a big story – that Eric Schmidt would be stepping down as the CEO of Google. Multiple sources and all that jazz. The basic story was that he was tired (who wouldn’t be), and that the idea of competing, and probably losing battles, against Apple and Facebook for the next decade wasn’t all that appealing. Who would replace him? That was the rest of the article.

But Google insisted the story wasn’t accurate, wasn’t even close to accurate, and generally contained no accuracy whatsoever. We killed the story, since their denials seemed fairly straightforward and honest, and we found no other independent sources.

Knowing I’d be annoyed by today’s news that Eric Schmidt will be stepping down as CEO of Google most likely explains why Google offered to let talk to the Trinity – Larry, Sergey and Schimdt – this afternoon in the flesh. At least, I assume they were in the flesh on the other end of the phone.

The well rehearsed message coming from all three of them is that this is a good decision, it’s not a rushed decision, and it’s a decision based purely on what’s best for the company.

Schmidt stressed that Larry is ready to take the CEO position because for the last decade he, Sergey and Schmidt made all important decisions together. “The only difference is that Larry will get the credit and attention,” said Schmidt, saying that Larry is more than ready for the job. And Schmidt will certainly still be around as executive chairman in case things slip.

“There’s an example every hour,” he said

I also asked Schmidt how much of the decision was personal, since that’s what we heard over the summer. He pointed out that he isn’t stepping down, he’s “stepping up” and that he’ll now be able to focus more on big picture things for Google like “deals, partnerships, customers and broader business relationships, government outreach and technology thought leadership.” He’ll still be an employee after the change, and he’ll still take his $1/year salary.

Schmidt responded similarly to my question about their 2008 statement to Fortune that the three would work together for twenty years. He’s still part of the team, and they’re all still working together.

Words aside, this is clearly Schmidt taking a much smaller role at Google. And there’s nothing wrong with that given the decade he just finished off. “No one in the universe could have done a better job as CEO of Google,” Larry said early in the interview.

Few people would disagree. But that doesn’t mean Schmidt wants to fight the same fight over the next decade. Eating Microsoft’s lunch may have been the salad days for Google. Now they’re fighting dual wars with Apple and Facebook, and the odds, in my opinion, aren’t completely in their favor.

Read more about the story here.