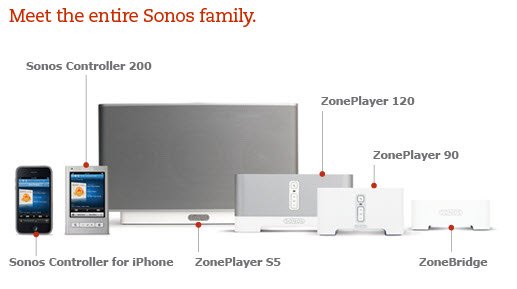 John MacFarlane had a dream: to send music from one box to every room in the house. In 2002, the only way to do this – sanely – was to run speaker wire from room to room, creating an install headache or a rat’s nest of wires. His company, Sonos, succeeded at sending the audio wirelessly, a feat that has been replicated many times but has never resulted in a product as successful and popular as the Sonos Multi-Room Music System.

There’s a dirty secret in gadget start-ups: they fail. Constantly and catastrophically. Unlike web or web service start-ups, gadget start-ups require R&D, manufacturing, and distribution. The Gizmondo, the most famous of all flame-outs, involved unkept promises, horrible hardware, and an exec with organized crime ties wrapping a Ferrari Enzo around a light pole.

Making hardware is hard. It takes time, and MacFarlane and his team took three years to finally launch the ZonePlayer 100 and remote control. During this time multiple vendors tried and failed to ship similar products. However, thanks to a unique design aesthetic, some nice software, and a lot of luck, Sonos survived and is now thriving.

GigaOm did a great analysis of the company as a business, but let’s talk a bit about why the company what the company did to succeed in a difficult marketplace.

The Sonos is easy to describe: it’s a device that sends music to every room of the house, wirelessly. Originally requiring a dedicated PC, the system now streams audio from multiple sources and includes speakers, amplifiers, and even a uniquely excellent remote control that presaged the common end-user LCD remote by years.

Sonos has a unique identity and consistent trade dress. All Sonos devices look similar and they all share a common, muted color. There are few, if any buttons, and set-up is dead simple, even back in 2005 when consumer electronics were even less logically designed than they are today.

The Sonos controller, a box the size of perhaps two old fashioned iPods put side by side, had a large, bright screen and dead simple UI. You selected a song, sent it to the room you wanted it to play in, or sent it to all the speakers in the house. Compared to anything else on the market six years ago it was very heaven.

Many manufacturers fall into one of two traps – they price their devices at the mid-point of the market, in order to be on parity with larger companies, or try to flood the shelves with low-priced garbage. As evidenced by a number of successful hardware companies, the premium spot is actually the first place to target, especially as a primarily American company.

Why? Well, a gadget start-up usually needs to target early adopters. Early adopters want quality and are usually not afraid of spending money to scratch an itch. Granted the price can go down over time, but an early high price can slowly roll down to a lower, more manageable price in the future. This is exactly what Sonos did: they launched initially as a fairly high-priced item and then launched lower-priced accessories and versions. They also accepted the inevitable and create an iPod Touch/iPhone app that would eventually replace their hardware remote control solution.

Getting It To All The Right People

All of the tech nerds in Silicon Alley and Silicon Valley know about Sonos. If they don’t, they know someone who has one. Many swear by them and there is a small but vocal community of well-known users.

Many of these users were tech journalists – I know even our own Arrington has used one and I reviewed it a few times in its lifetime – and I’ve been approached consistently by the company on a regular schedule. The key, here, is reminding the tech press that you still exist. Compare that to something like the homegrown FitBit. It was a clever product, but it seemed to disappear after an impressive launch.

Smaller companies can’t release product on a monthly basis. It takes years to prepare and ship new hardware and given the problem Sonos set out to solve – the streaming of audio to speakers – they are more an appliance than a disposable item of whimsy. Therefore, they solved that problem by updating the software in various ways, bringing in media partners, and generally gathering attention every six months or so. When new hardware launched, it was a big deal. But it was also a big deal when the smaller stuff launched because the established install base was ready for upgrades.

This also kept the idea of Sonos fresh in customer’s minds. The Sonos solves a very specific problem and once you realize it exists, you’re initially intrigued but the pricing puts you off. After reading more and more about it, however, it begins to make more sense. This is how you build a customer.

There’s no guarantee of success in the gadget space, but Sonos hit on all the right cylinders at exactly the right time. They may be small, but they’re popular and their still going strong, even after a good 9 years.

Could a larger company like Sony pull off a Sonos? Probably not. The product is too niche and Sony would probably overdo it with an odd branding campaign centered around rubber balls and lithe Moroccan dancers. Sonos kept it small, kept it sane, and sold a lot of hardware.