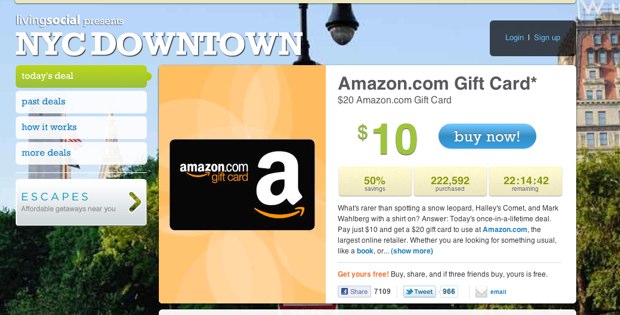 Today is going to be a big day for daily deal site LivingSocial. It is offering $10 off any $20 purchase on Amazon.com, and it’s already sold more than $2 million worth of the coupons in the first two hours of the deal. There are about 22 hours left to go. Some people are already noting that this 50 percent deal will “blow away” Groupon’s Gap deal, which resulted in $11 million worth of coupons sold. (That was $25 off a $50 purchase).

But here’s the thing. Amazon is not just the latest retailer to try out the daily deal concept. It is also an investor in LivingSocial. Last December, it put $175 million into LivingSocial for a stake in the company. Now it is helping out with deal volume, and no doubt will be introducing hundreds of thousands of new consumers to LivingSocial, and all with just a $10 discount. It might end up costing Amazon a few million dollars.

But seriously, how many people are going to find something with a price tag of exactly $20? I bet people will end up buying a lot of books and CDs today, but will still end up spending more than $20. And Amazon will more than make up for the $10 discount, or at least cover most of that with additional sales which otherwise would not have appeared. It’s not like Amazon is offering a 50 percent or 25 percent discount on any purchase.

But if the promotion works out, you can also see this as a first step, with Amazon going back to the daily deal well as a way to drive sales during slow periods. The question is, how big will this promotion end up being? Give your best guess as to how many coupons will be sold by the end of the 24 hour period. We are already up past 222,000