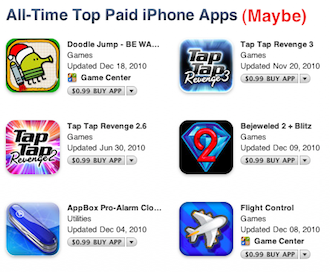 Last night, we pointed out that as a part of their countdown to 10 billion app downloads, Apple actually revealed the top all-time app downloads for paid iPhone apps, free iPhone apps, paid iPad apps, and free iPad apps. The top results seemed pretty straightforward, with a few oddities here or there. And there may be a good reason for such oddities. The system appears pretty easy to game.

Well, technically, it’s probably not really “gaming” the system. At least not yet. It just appears that Apple is being a little sloppy in populating their lists. After speaking to a few top app developers, it seems that Apple is counting total download numbers in aggregate, regardless of if an app switched between being free and paid.

In other words, to boost yourself on the top paid app lists, all you would have to do is go free for all but one of the days, then switch to paid, and all those downloads would be counted towards your total as a paid app, it seems.

Obviously, free apps tend to be downloaded more than paid ones. So if you had a popular app and went free, then went back to paid, this could be a great way to jack your stats.

And several apps have done this switch from time to time (though we’re not saying they did it to jack their stats — they probably didn’t know that Apple would rank this way — instead it was just a nice offer to customers). Top apps like Traffic Rush and a few of the Tap Tap Revenge games are good examples of this.

One developer we spoke to, John Casasanta of TapTapTap, said that he found the numbers fishy because they’ve done multiple apps and Apple’s rankings don’t line up with their actual separated numbers. But if you take into account free and paid downloads for one app, things begin to align.

We’ve reached out to Apple about the issue, and will update if we hear back. In the meantime, be a bit wary of some of the top paid apps on that list — they may not be making as much money as it may seem given their position.