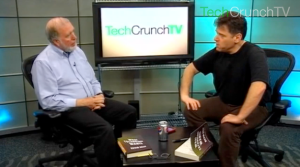 As Silicon Valley legends go, Kevin Kelly is up there with John Perry Barlow, Woz, Stewart Brand, Steve Jobs and a select group of dreamers, troublemakers and lunatics who invented the future that we at TechCrunch now cover every day. The publisher and editor of the Whole Earth Review between 1984 and 1990, the co-founder of the Hacker Conference, one of the founders of the Well in 1985, the co-founder and original executive editor of Wired magazine, Kelly has always been a step or two ahead of everyone else.

So it was a tremendous honor for me to have Kevin come into the TechCrunch studio to talk about his life, his view of technology and his provocative new book What Technology Wants. In this first of two posts, Kelly talked to me about what Kevin Kelly wants and whether or not today’s social revolution, which he kicked off fifteen years with the Well, was inevitable.

Say what you will about Kevin – he and I certainly haven’t always agreed in the past – but there is something uniquely coherent, authentic and faithful about his view of the world. I’m not sure if Kevin Kelly was or is inevitable, but if he hadn’t existed, we would have had to invent him. Watch, listen and enjoy. He has much to teach us all.

What Does Kevin Kelly Want?

Kevin Kelly on the Social Revolution