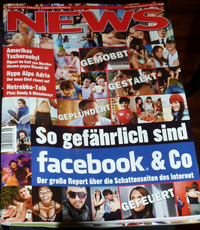 Both The Wall Street Journal and The New York Times are reporting this morning that Goldman Sachs has decided to limit its much ballyhooed private offering of up to $1.5 billion in Facebook shares to international investors only.

The reason? SEC scrutiny, sparked by this January 2nd article in The New York Times announcing Goldman’s $450 million investment and creation of a “special purpose investment” vehicle for Facebook. Arguably, as the Times article created a demand to get in on the private placement, it could effectively be viewed as solicitation by the SEC.

In a statement given to The Times’ Andrew Ross Sorkin, Goldman refers specifically to “intense media attention” as motivation for pulling the U.S. placement.

“Goldman Sachs originally intended to conduct a private placement in the U.S. and offshore to investors interested in Facebook. The transaction generated intense media attention following the publication of an article on the evening of January 2, 2011, shortly after the launch of the transaction. In light of this intense media coverage, Goldman Sachs has decided to proceed only with the offer to investors outside the U.S.

Goldman Sachs concluded that the level of media attention might not be consistent with the proper completion of a U.S. private placement under U.S. law. The decision not to proceed in the U.S. was based on the sole judgment of Goldman Sachs and was not required or requested by any other party. We regret the consequences of this decision, but Goldman Sachs believes this is the most prudent path to take.”

It’s unclear what the consequences would be if Goldman had continued offering US investors the chance to buy Facebook shares and the SEC found that it had acted inappropriately, say by leaking the story to The Times. By only offering investment outside of the SEC’s jurisdiction, Goldman is effectively circumventing such an investigation and the possibility of fines or other sanctions.

Media coverage of hot companies has raised red flags with SEC regulators in the past, most notably with Google’s infamous Playboy interview just before its IPO. Google went on to IPO at $85.00 a share.