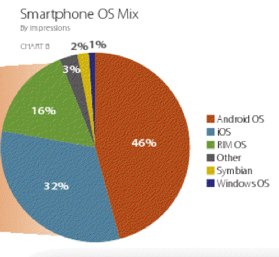 This has been a significant few weeks for Millennial Media. The ad network just closed a $27.5 million investment round, announced that the company had tripled its revenue in 2010, and today, is releasing one of its more noteworthy monthly reports. Millennial, whose ads reach 63 million of a total of 77 million mobile web users in the U.S., or 81 percent of the U.S. mobile web; is reporting that for the first time in the company’s history Android surpassed iOS as the largest Smartphone OS on the Millennial network in terms of impression share.

This month, Millennial broke down the revenue generated by apps in Q4, and interestingly Android had a 55% share as opposed to 39% for Apple. Android apps had a 13% increase in ad revenue quarter-over-quarter. 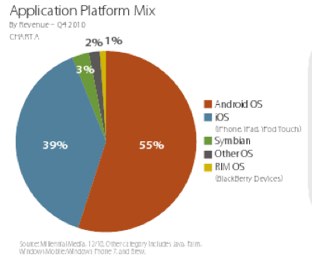 While Apple may have lost the top spot in terms of impression share, Millennial reported that Apple continued its reign as the top manufacturer on the Millennial network (as it has been for the last 15 months), representing 21 percent of the network’s impression share by manufacturer in December. In terms of actual devices, the iPhone and iPod touch made up the two of the top three individual mobile devices.

With respect to apps using advertising on Millennial’s network, Android applications represented 55% of the Application Platform Mix in Q4 2010, a 13% increase quarter-over-quarter.

Clearly the most compelling statistic out of the entire report is that Android finally surpasses iOS for mobile ad impression share on the network. While this is a first for Millennial’s network, Android has steadily been eating away at the smartphone marketshare that Apple and RIM once commanded.

Of course the real test will be whether Android can sustain its domination over the next few months. But Android has a lot of leg room to loose even a little bit of its impression share (there’s currently a 14 percent spread between the two operating systems) so it looks likely that the report will show similar findings for January.