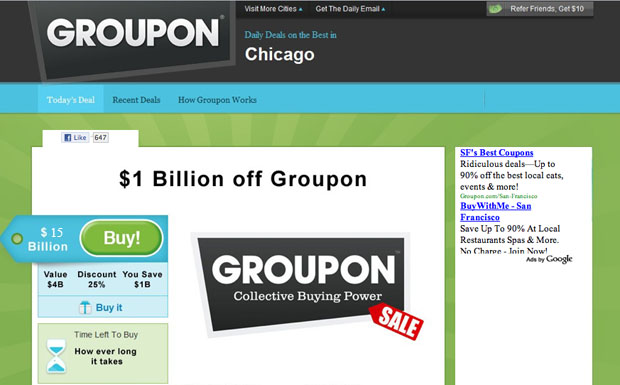 Ready for more “Groupon is worth what?!” kind of reactions? The New York Times is reporting that the daily deals site has been seriously discussing going public with Wall Streeters this week, with a rumored IPO sometime in Spring.

The report also amps up Groupon’s valuation to more than double the $6 billion Google had reportedly offered for the company just months ago, at about $15 billion “or more.”

From The New York Times:

“An I.P.O, if it happens, will be a significant milestone for the young startup, led by 30-year-old founder Andrew Mason, whose quirky personality has helped shaped the site. The offering, which would also be among the most highly anticipated since Google’s in 2004, would also represent the highest valuation on the company to date.”

Groupon is on a tear, recently raising $950 million dollars from investors such as Greylock Partners, Kleiner Perkins and Morgan Stanley in the largest ever financing round for a startup, according to the Times.

Groupon, which has aggressively focused on its international expansion plans as of late, also hit a less notable milestone today, over $1 billion dollars saved through the use of Groupons.

Here’s Groupon CEO Andrew Mason, the “quirky personality” behind the rise of group couponing, in an interview for Crain’s “40 Under 40: 2009.”