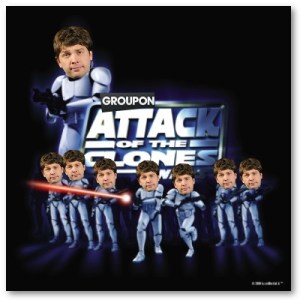 As we noted yesterday and discussed with Groupon COO Rob Solomon months ago, Groupon has been a bit flummoxed over how to enter the difficult but insanely lucrative Chinese market. If you thought the recent acquisitions of sites in Taiwan and Hong Kong were the answer, think again.

Apparently Groupon’s Berlin team– which has been leading much of its international efforts with varying degrees of success— has hired its own team and sent them to China to build something new on the mainland from scratch. (I’d guess a future acquisition might still be in the offing once it gets its China sea legs.)

Now, a source tells us that Groupon China is using “large parts” of that $950 million to aggressively hire for all positions. Check out this posting from a private university job board:

“I do not want to disclose too much information here, just some rough facts:

– Groupon has secured 950mn. EUR, large parts of which are used for penetration of the Chinese market. That means near to endless funding. Compensation is highly, highly competitive.

– The core management team consists of 10 people (including me), all of which (exept me :) ) have worked for Groupon before and/or have experience at leading consultancies / investment banks.

– This is the fastest growing venture of all times. Since we landed here on Sunday we hired 50 employees (middle management level, mostly Chinese McK), by March we’ll grow to 1000 employees.

– We are recruiting on all positions / functions / levels. If you hold a Masters degree from an internationally leading university, have working experience from a reputable bank/consultancy, have startup experience you will be able to join the management team, otherwise we will also find a suitable position for you.

Send me your CVs to [REDACTED] – the sooner the better.

Whoa. 1000 employees by March? Groupon clearly isn’t taking some Google-like “we’ll just operate from Hong Kong and that’ll be fine” approach. Groupon is taking on the biggest clone army in the world.

Will the Chicago two-year-old that has broken so many other Silicon Valley records also break the curse of China? I applaud Groupon doing this the hard way by investing in building a team on the ground, but plenty of companies have lost “near endless funding” trying to conquer China. I can guarantee the solution doesn’t just lie with MBAs and consultants. I hope our redacted friend knows what he’s/she’s getting into.