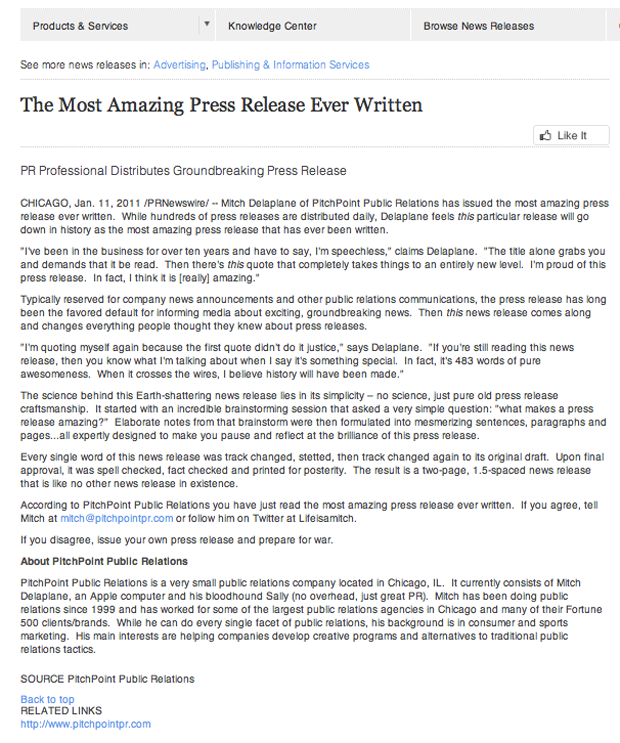 Please do more of this. I know we have been at odds in the past but today you have redeemed yourself, fully and entirely, for eternity or at least the next couple of weeks.

Mitch Delaplane, you are a god among PR professionals. You and your 483 words of pure awesomeness had me at “The title alone grabs you and demands that it be read.  Then there’s this quote that completely takes things to an entirely new level.” Indeed.

The Most Amazing Press Release Ever Written

“I’ve been in the business for over ten years and have to say, I’m speechless,” claims Delaplane.  “The title alone grabs you and demands that it be read.  Then there’s this quote that completely takes things to an entirely new level.  I’m proud of this press release.  In fact, I think it is [really] amazing.”

Typically reserved for company news announcements and other public relations communications, the press release has long been the favored default for informing media about exciting, groundbreaking news.  Then this news release comes along and changes everything people thought they knew about press releases.

“I’m quoting myself again because the first quote didn’t do it justice,” says Delaplane.  “If you’re still reading this news release, then you know what I’m talking about when I say it’s something special.  In fact, it’s 483 words of pure awesomeness.  When it crosses the wires, I believe history will have been made.”

The science behind this Earth-shattering news release lies in its simplicity – no science, just pure old press release craftsmanship.  It started with an incredible brainstorming session that asked a very simple question: “what makes a press release amazing?”  Elaborate notes from that brainstorm were then formulated into mesmerizing sentences, paragraphs and pages…all expertly designed to make you pause and reflect at the brilliance of this press release.

Every single word of this news release was track changed, stetted, then track changed again to its original draft.  Upon final approval, it was spell checked, fact checked and printed for posterity.  The result is a two-page, 1.5-spaced news release that is like no other news release in existence.

According to PitchPoint Public Relations you have just read the most amazing press release ever written.  If you agree, tell Mitch at mitch@pitchpointpr.com or follow him on Twitter at Lifeisamitch.

If you disagree, issue your own press release and prepare for war.

PitchPoint Public Relations is a very small public relations company located in Chicago, IL.  It currently consists of Mitch Delaplane, an Apple computer and his bloodhound Sally (no overhead, just great PR).  Mitch has been doing public relations since 1999 and has worked for some of the largest public relations agencies in Chicago and many of their Fortune 500 clients/brands.  While he can do every single facet of public relations, his background is in consumer and sports marketing.  His main interests are helping companies develop creative programs and alternatives to traditional public relations tactics.