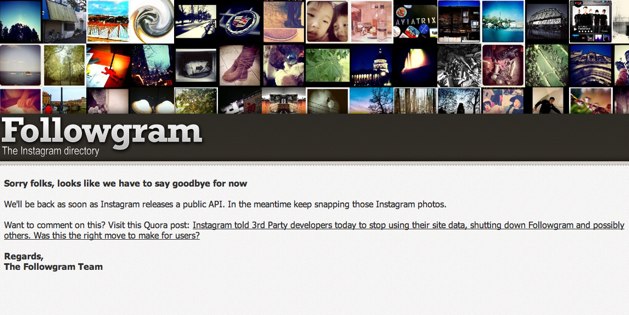 In an interesting turn of events, it looks like photo sharing app Instagram has blocked startup Followgram for scraping the app’s data without their consent. Followgram was developed to add a web interface to Instagram photo sharing, which has been restricted to mobile apps for now (with the exception of when users Tweet or share photos via Facebook or Flickr). Using an RSS feed, Followgram users could access their Instagram photos online and share their profile with other users. The site also included the ability to browse other Instagram users’ photos as well.

So why did Instagram shut down Followgram? Instagram doesn’t have an API (yet, that is—the startup is supposed to release an API soon), so Followgram was scrubbing Instagram for user data and content without permission. Followgram’s site now reads, “Sorry folks, looks like we have to say goodbye for now. We’ll be back as soon as Instagram releases a public API. In the meantime keep snapping those Instagram photos.”

While it doesn’t appear that Instagram has shut down this startup yet, a disclaimer was added recently on the top of the site, This site is not owned, affiliated, or officially supported by Instagram (Burbn, Inc.). But it could only be a matter of time before Instagram.tk is shut down as well.

Of course, no controversy in the tech world is complete without a requisite Quora thread, and the Followgram site points to this one if visitors want to comment on the shut-down of the startup by Instagram.

Followgram developer Herman Schutte writes, Yes, the website was in violation of their terms of service and I probably shouldn’t have used their API. But I also think that with the current start up boom, companies like Instagram should not wait this long before releasing a public API.

As to whether Instagram is right or wrong for blocking Followgram, commenters seem to be mixed. The gist of the commentary seems to sum up to this: While Followgram’s scraping was illegal, Instagram needs to release an API soon to keep up with consumer demand for related services.

Especially since there are some elements lacking from Instagram’s platform (i.e. a web interface), there is an ecosystem that could be built off the enormously popular photo sharing app. On thing is for sure—when Instagram does eventually release an API, Followgram will be first in line.

UPDATE: Instagram CEO Kevin Systrom has responded on Quora, writing “We’d like to 100% support developers building on top of Instagram. We’re working our hardest at coming out with a simple API that people can start using freely to create cool projects just like Followgram. I’m excited for the release of our API, and even more excited to see the cool stuff folks will build on top of it.” He adds that Instagram’s API will be released imminently, most “likely in the next week or so.”