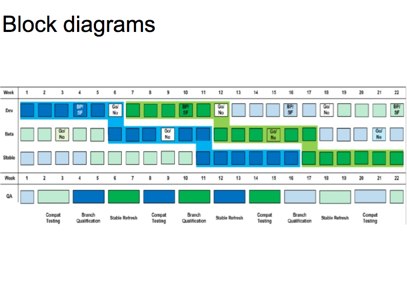 Google’s approach to developing its Chrome browser is to release updates early and often. Its goal is to put out a new release every six weeks or so. Updates have become so routine that Google barely even mentions them anymore.

Anthony LaForge, the technical program manager at Google overseeing Chrome development, created the presentation below (and posted it on Google Docs) to explain how Chrome’s development cycles work. Instead of a traditional software development cycle where features are crammed into each release or delay the release, Chrome puts out a new release no matter what every six weeks. If new features aren’t ready, they wait for the next release, just like waiting for the next scheduled train at Grand Central.

Another thing that speeds things along is that the Chrome browser is simultaneously developed along three different “channels” (dev, beta, and stable). Users can pick which one they are most comfortable with, and their browsers are updated automatically. New features are introduced first in the dev and beta channels, which merge with the stable channel as those features get patched and stabilized.

The versions start to blend together. The approach is more like updating a website than a piece of client software. The version numbers don’t really matter. What version of Amazon are you on? Exactly.