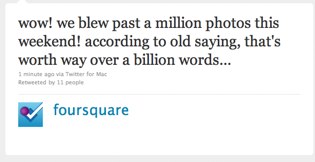 Three weeks ago, Foursquare updated its iPhone app to include the ability to upload photos with check-ins. Around that time Foursquare competitor Gowalla hit the one million milestone after nine months of including a photo uploading feature. It looks like it has taken Foursquare less than one month to reach that milestone, according to a Tweet sent out by the company this morning.

Foursquare hit one million photos over the weekend but it’s unclear who posted the one millionth photo. The fact that the startup hit the milestone so quickly is not surprising, considering that Foursquare co-founder Dennis Crowley said in late December that the network was approaching one photo uploaded per second. One factor that has contributed to this traction is that Foursquare launched their photo functionality with a number of popular partners including Instagram, PicPlz, and Foodspotting. The photo uploading functionality was also added to its Android app.

To put this number in perspective, Flickr recently hit 5 billion photos and are seeing 3,000 images uploaded every minute.