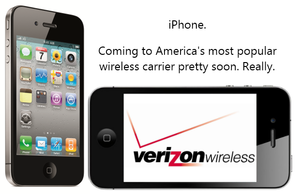 It has been a litany akin to prayer in certain circles: “Everything will be better when Verizon gets the iPhone. I’ll buy it then.” But what will a Verizon iPhone really change? Let’s think this through.

First, expect iPhone sales to surpass Droid sales for a brief period and then level off. My friend (a former Hell’s Angel) told me how a Verizon rep sold his niece a Droid X explaining that it was as good as the iPhone. After seeing my her uncle’s iPhone, however, she was gravely disappointed and repeated the litany to herself, albeit with some trepidation as the rumor of iPhone’s apparition on Verizon has been a long time coming. This time, however, we’re almost certain that the prayer will come true. Before you Droid-heads start flaming, accept that, at least until Honeycomb, when Verizon has the iPhone its Droid sales will dip.

Second, expect nothing to change in terms of iPhone development over the next few years. I agree with Gruber in his belief that Verizon will sell a CDMA iPhone and not an LTE model. The GSM and CDMA models will be upgraded concurrently but there is no reason for Apple to release a “better” model on either platform (even LTE) until all carriers converge to LTE.

Next, expect a banner year for Verizon. Last year was more of a pennant year as subscribers flocked to AT&T and their profits tumbled. That will not happen in 2011.

Fourth, expect Apple make this announcement quietly and without fanfare. I doubt His Steve-ness will even show up to the event on Tuesday, if that is, in fact, what the announcement is about. Maybe he’ll appear on a screen, benevolently beaming down on the faithful who masochistically stuck with the phone on AT&T and who will be gravely disappointed when they can no longer roam internationally. But considering the iPod Touch has become a Wi-Fi phone that works everywhere, we’re looking at the reduction of carrier control in mobile anyway, so who cares?

Now, for the bad news. The Verizon iPhone won’t be much better than the AT&T iPhone when it comes to reception and data transmission – at least not yet. Even anecdotally, as evidenced by this Ars survey, most users use a little more than 200MB of data a month with outliers hitting over 1GB of data. That’s 200MB per iPhone and there are a total of about 11 million AT&T iPhones floating around out there. According to AppleInsider, Verizon sold an estimated 4.4 million Droids. Verizon has 92 million subscribers while AT&T has 90 million. So 11 million AT&T subscribers are slamming the network while 4 million Droid-ites are tapping Verizon’s network gently. So what happens, then, when the iPhone effect hits Verizon, especially on Verizon’s older, slower CDMA network? Verizon will experience the exact issue that has been plaguing AT&T: the curse of success.

Contrary to popular belief, AT&T isn’t hobbling iPhone calls and data service out of malice or ignorance. It just hard to serve that much data to that many people. Last Monday in Las Vegas, for example, I had perfect iPhone reception. Add 130,000 people – all but a few of them iPhone users – to the network during CES and you’ve got a mess. I couldn’t make a call or get an email all week. What’s going to happen when Verizon iPhones roll into the same town? Even if you split iPhones evenly (and you won’t, because international users will drive up the GSM-based iPhone count) you’re still overloading both networks. What’s Verizon going to do? Send the Can You Hear Me Now guy to install new cells? Mark my words – Verizon’s vaunted connectivity and coverage will plummet. Heck, if I were a conspiracy theorist I’d note that Verizon’s website no longer touts its coverage to avoid potential class action lawsuits.

The Verizon iPhone won’t be a solution to the many problems folks in urban areas like San Francisco and Manhattan are experiencing. In fact, it just spreads the pain to two carriers.

However, it’s nice to know someone is listening, even a few years after the fact. Steve is truly good and kind.