Days after California passed a bill criminalizing certain online impersonations, the person behind the @ceoSteveJobs Twitter account tells us that someone from Apple has complained to Twitter about the @ceoSteveJobs Twitter account. The tipster (who wants us to call him Christof) tells TechCrunch that Twitter has received a “valid report” i.e. either from “the user being impersonated or someone legally authorized to act on behalf of that user/entity” that the account is in violation of the Twitter parody policy, which holds that usernames and profile names should not be the exact name of the subject among other things. 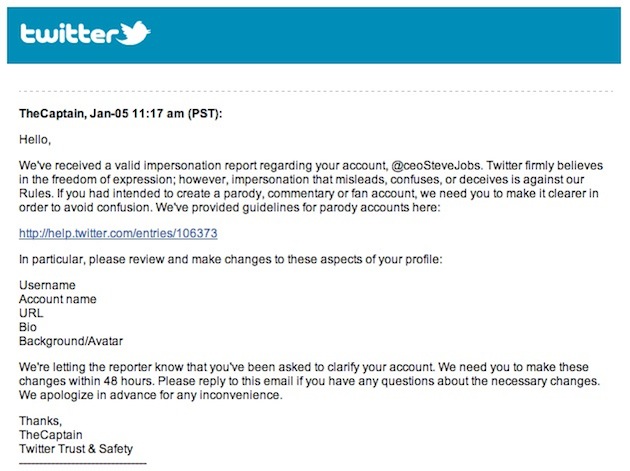 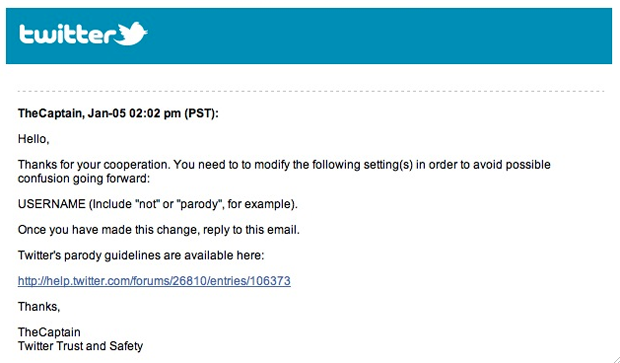 Christof has already changed his bio to include the word “parody” and will have to add something like “Fake” or “Not” to his username to be in accordance with policy. He says that all the good ones like “fakestevejobs” “fakesteve” and”fakejobs” are already taken and also thinks that a name change will affect the account’s humor. “Most parody doesn’t blatantly label itself. That takes away the fun and the magic of it. If @bpglobalpr had been @fakebp, it wouldn’t have caught on nearly as fast and might never have been as funny. Once you got the joke, the fact that it felt like it was really coming from BP made it all the funnier.”

Last time the @ceoSteveJobs account made headlines it was because it had confused the UK’s Daily Mail enough to publish a post quoting it as the real Steve Jobs account. So perhaps Apple’s concerns are valid. When contacted about the account, representatives from Twitter said, “We don’t generally comment on alleged user violations. Our rules, guidelines and actions tend to speak for themselves.” Apple did not return my request for comment. 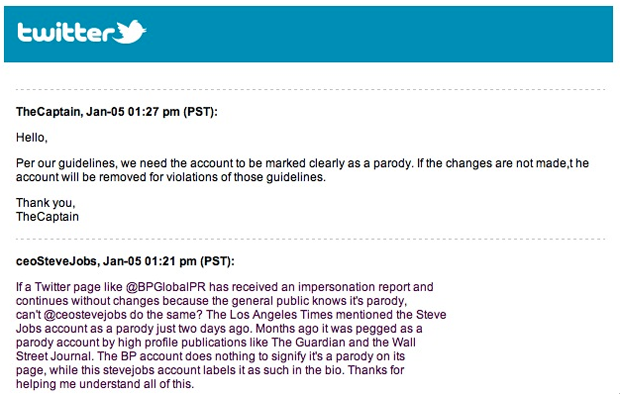