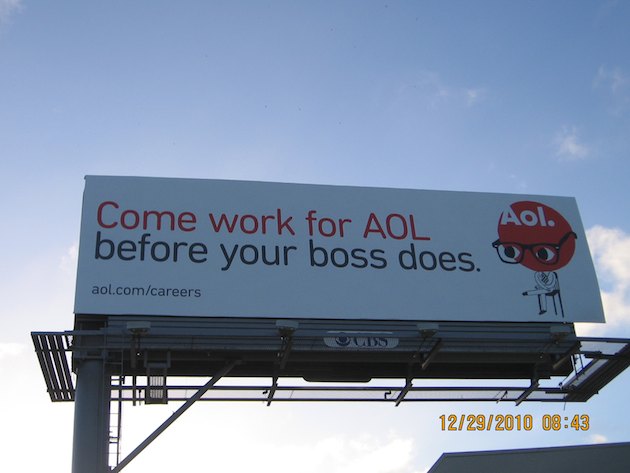 “Come work for AOL before your boss does.”

I still don’t get why our parent company spells AOL in all caps but uses “Aol” in its logo. There’s probably a memo around here somewhere that explains it. But that isn’t what this post is about.

This is a picture of a new billboard ad recently put up along highway 101 in Silicon Valley, visible to southbound traffic around the Whipple exit a few miles north of Palo Alto. We first heard about it from a tipster, who called it “odd.” And I agree.

It’s not that AOL isn’t super awesome to work for some of the time. They have a great new office in Palo Alto that we don’t have to actually go to, and Molly in human resources is extremely helpful and efficient. AOL is Shangri-La compared to working at Yahoo.

But people aren’t exactly fleeing their jobs to go there, at least as far as I know. If you want to go work somewhere in Silicon Valley before your boss does, it’s Facebook, Twitter or Zynga. The pre-IPO startups.

It seems a little, I dunno, over-confident.

Nevertheless, they’re hiring. So if neither you nor your boss can get a job at one of those hot pre-IPO companies you may want to consider an exciting and rewarding career at AOL. People with extremely large red heads are preferred.