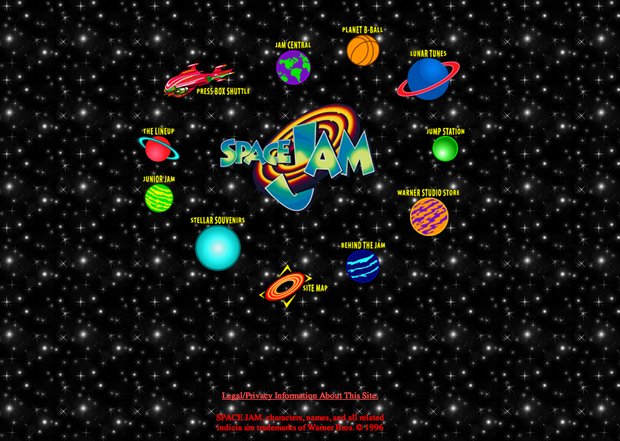 A couple of days ago Reddit user Jeff Ubelhor was talking to his friends about something or other and Space Jam, the movie starring Bugs Bunny and Michael Jordan, came up (he swears they weren’t stoned). They checked on the website and realized that it hadn’t been touched since 1996. “From there I decided to post it on Reddit,” says Ubelhor “Because I thought it was hilarious, not only the design, but just how different Internet marketing was 14 years ago.”

The rest is Internet meme history. On December 29th, artist, professor and FAT Labs member Steve Lambert was given a link to the site by a student in his Hacking 101 class, posted it to the FAT Labs email list and tweeted it out as “The original Warner Brothers “Space Jam” movie website has been left untouched since 1996,” his one time student, Buzzfeed founder and most viral human alive Jonah Peretti retweeted it, without giving him credit.

Both tweets were retweeted hundreds of times and the next thing you know Lambert was receiving emails like this:

I’m a reporter/anchor with CBC TV news in Toronto. Your SpaceJam tweet was trending locally for a couple of hours in Toronto, and was spread widely through our office. We’re going to a bit about it on our local supperhour newscast tonight.

Just wondering, do I credit you (through one of your students) as the originator of the tweet? Any comments on how many retweets you’ve generated?

And it wasn’t only Canadian TV stations that showed an interest. Since the Reddit post the site has been picked up by Buzzfeed (obviously), Huffington Post, Boing Boing, Geekosystem, Yahoo Sports, Slashfilm and countless others. Sister blog Urlesque, taking the phenomenon as evidence of a resurgence in interest in old movie sites, just published a post called “Old Official Movie Sites – Titanic, Air Bud, Event Horizon and More.” Sigh.

The original Reddit thread has over 2015 votes and 686 comments, including such meta and self-aware gems as “I wonder if we’re DDOSing a weakling 1996 server in an abandoned building somewhere right now” and “Browsing this on my droid x while moving 70mph. 1996 just shit their pants.” 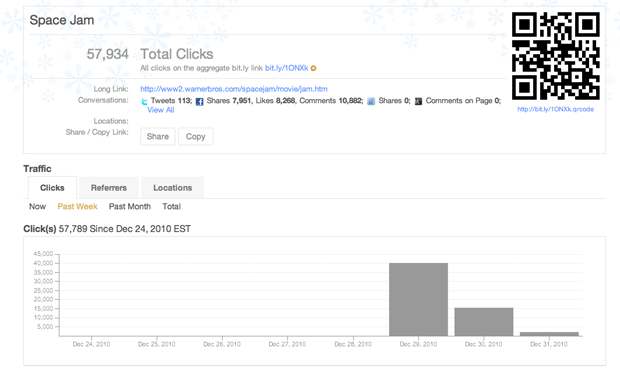 Since Peretti and Lambert’s tweets the bit.ly link has received over 57K total clicks, over 40K in one day. And that is just clicks on the link Peretti tweeted out, which are nowhere near the traffic the site probably got all in all.  Peretti estimates that the Space Jam site could easily have garnered around 500K views since hitting the front page of Reddit shortly after midnight on Wednesday morning, and gleaning from my web editorial experience I’m pretty sure that number is in the right ballpark. I’ve reached out to Warner Bros for the exact traffic stats.

A lot changes in 14 years and some things don’t. While the site’s original designer Jen Braun is “still working on the web,” Assistant to the Designer Andrew Stachler is now VP of Interactive Marketing at Warner Bros.

In 2010, computers are faster, monitors are thinner, social networking has exploded and we are now browsing the web on our mobile phones, among other things. But we’re all still staring at this silly looking website from 1996.

You could just chalk up this week’s explosion of the Space Jam site to an extremely slow holiday news cycle, but it’s much more than that. We’re now in the very last hours of the most fast-paced decade ever technology-wise, and that is a little scary. In this era of Word Lens and Self-Driving Cars, perhaps some of us are more than a little nostalgic for simpler times when “having a website, no matter how bad, was an achievement in itself.”