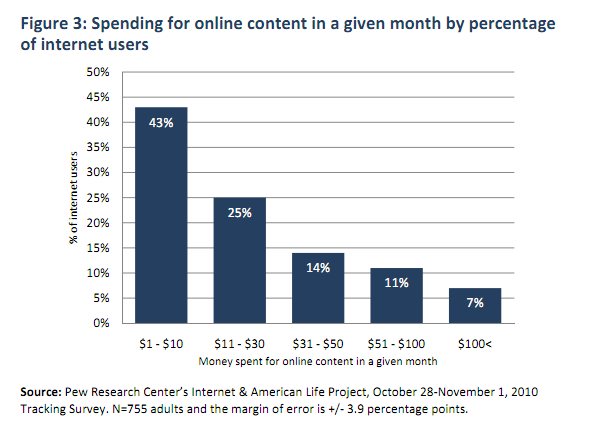 The Pew Internet organization put out results of a survey on how many people pay for digital content online. The study found that 65 percent of people online have paid to download some form of digital content or for a subscription to a digital media service. The survey excluded physical goods bought online and was focussed only on digital content such as music, software, news, and other online or electronic publications.

For those who do spend money online on digital media, most spend between $1 and $10 a month, with 68 percent spending less than $30 a month. (You can see the distribution of amount spend in the chart above). The two kinds of digital goods people are most willing to pay for by far are music and software. One third of respondents (33 percent) say they have paid for either digital music or software online. And 21 percent have paid for mobile apps. So if you combine mobile apps and other forms of software, that is the largest single category even accounting for overlap in the numbers. Paying for digital games comes in fourth at 19 percent.

What about digital newspapers or magazines behind paywalls or for sale for tablets like the iPad? A respectable 18 percent of respondents say they have paid for news or other reports online. That even beats out the 16 percent who have paid for movies or TV shows. Media companies will love that stat. And ebooks? Only 10 percent have bothered to pay for those.

Here is the full breakdown: