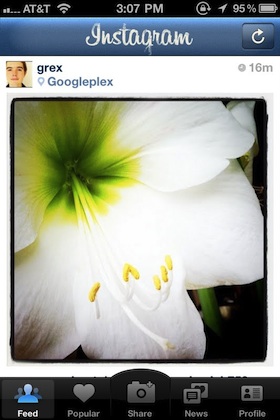 It was exactly three months ago yesterday that I first wrote about Instagram. At the time, a number of people wondered why I devoted 1,000 words to a simple photo-sharing app that was only available on the iPhone and not even out yet. The answer was that I had a feeling it would be a hit. And it is. The service has announced today that they’ve reached a million users.

It took Foursquare just over a year to get a million users. It took Twitter about two years. Instagram? They accomplished the feat in less than three months.

The rapid growth started early on. It took the service less than a week to get their first 100,000 users. Remarkably, they’ve apparently been able to keep up that pace. Also remarkable is how they’ve been able to scale for that rapid growth. While they started as a two-man team, they’ve since expanded the team and moved into a proper office — appropriately enough, Twitter’s original office.

The’ve quickly scored some partnerships along the way. National Geographic is experimenting with using the service to share interesting photos, Twitter now includes their photos in the right-side pane, and they were a launch partner for Foursquare photos. They even got Apple executive Phil Schiller using the service.

This past weekend saw them release a few new features, including two new filters, and seven new languages. But what’s next? How are they going to get their next million users?

First up is likely an API, co-founder Kevin Systrom tells us. At this point, he believes that will beat their next big project out the door: an Android version of the app. Yes, they’re working on it, but Systrom says they don’t have any timing to announce on when it will happen. “Android is really important to us, and we know it’s important to lots of people too,” he says.

He suspects that people will use their API to come up with interesting ways to use or interact with Instagram on different platforms.

I also asked Systrom about potential updates to the bare-bones website. “Along with an API, this is going to be one of the biggest priorities going forward. Our goal is to remain mobile focused for production, but create an engaging browse/consumption experience on the web,” he says.

When I asked him about the Twitter partnership and if it has led to fewer people visiting their website, he noted that every day sets a new high water mark in terms of traffic from Twitter. “If it’s one thing I’m starting to see over and over again, it’s that if you do the right thing for users, it will benefit you in the end,” he says. “Part of our philosophy is making it easier for you to broadcast your content anywhere – and I’m excited about all the integrations we’ve done so far,” he continues.

A key part of Instagram’s fast growth has also been their international success — that’s the reason they’ve focused on language support early on. While the U.S. is the top country in terms of users, Japan is huge as well, Systrom notes. The service is also big in China, Taiwan, Germany, the UK, Malaysia, Canada, Indonesia, and South Korea, he says.

Finally, I asked about funding. Since it was revealed that one of their original backers (before they pivoted), Andreessen Horowitz, decided to fund their rival PicPlz going forward, there have been a ton of rumors swirling about who would swoop in to back Instagram. We established the the early Sequoia talk was pure rumor. But yesterday, VentureBeat reported that Benchmark Capital may be closing in on a round with the company. We haven’t been able to confirm that, but a number of people we talked to found that scenario likely.

We do know that Instagram is definitely working on a new round at this point. Sources have said there is “a ton” of interest in backing the company — hardly surprising given the traction they’re seeing. And the amount is likely to be in the same $5 million range that PicPlz got. Systrom, naturally, won’t comment on any of that.

So after the million user milestone, expect funding, an API, a revamped website, and an Android app, in that order.