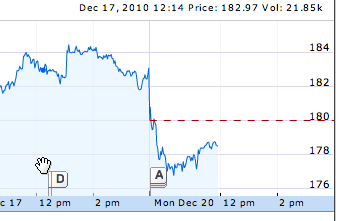 Netflix is one of the best performing stocks this year, up 225 percent year-to-date, with a $9.3 billion market cap. But it is also priced to perfection, with a lot of short sellers hoping to profit from its fall and antsy Wall Street analysts downgrading the stock. Today, CEO Reed Hastings defended Netflix’s prospects in a very public, very detailed, and very unusual blog post on Seeking Alpha. The post was in response to a specific short seller, Whitney Tilson, who last week laid out his case against Netflix in another Seeking Alpha blog post. By addressing this one short seller, of course, Hastings is trying to address the market’s jitters as a whole, and he does a pretty convincing job of it.

Tilson raised a number of concerns, ranging from the recent resignation of Netflix’s CFO to pressures on Netflix’s margins to market saturation and increasing competition in streaming video. Hastings acknowledges that Tilson “only has to be right on one or two of these issues in 2011 for him to make money on his short of Netflix. . . . Odds are he is wrong on all of them, in my view.”

Hastings then goes on to rebut the short seller’s argument (short sellers are investors who bet against a stock). I’ll summarize each of Hasting’s counter-arguments below:

Let’s drill down further into some of these issues. Netflix is obviously betting big on the transition to streaming video. The more it can get subscribers to watch streams instead of DVDs, the more it saves on postage. On the flip side, video content owners are demanding more money for those streaming rights. Hastings thinks that concerns about too many streaming services coming online is overblown at this point:

Streaming is growing rapidly; it is propelling Hulu, YouTube, Netflix and others to huge growth rates. Streaming adoption will likely follow the classic S curve, and we’re still on the first part (acceleration) of the S curve. Since we expanded into streaming, Netflix net subscriber additions have been 1.9m in 2008, 2.9m in 2009, and over 7m this year (estimated). While saturation will happen eventually, given the recent huge acceleration of our business specifically, and streaming generally, saturation seems unlikely to hit in the short term.

And while a major new streaming competitor could come in and blow away Netflix’s lead, Hastings makes the case that Netflix has a huge competitive advantage when it comes to the number of existing paying subscribers and its cost to acquire new ones:

For a competitive firm to materially hurt our growth, they have to have some positive differentiator (price, additional content, integration, etc.), and then they have to market their service effectively. This wild-card of major new competitor offering great content and marketing aggressively is the single best near-term short thesis, but no one knows if it will happen in 2011.

The core competitive barrier for direct competitors is brand/subscriber-evangelism. Our large subscriber base is very happy with Netflix, and tells their friends about Netflix. That means that the cost of acquiring the incremental 1m subscribers is lower for us than for a competitor, and thus our net additions are higher

Finally, in terms of the quality of the movies and TV shows Netflix makes available for streaming versus what people get on cable TV, Hastings points out:

The key question is whether some combination of Netflix, Hulu Plus, YouTube, Google TV and other Internet video services will some day effectively replace the cable TV experience. And if it can, whether that combination will cost more or less than the $80 or more people pay for cable today. But remember, people are already paying for Netflix, which helps Hasting’s case.

Whether or not the stock will keep going up is another question entirely. At $178 a share, would you buy or short the stock?