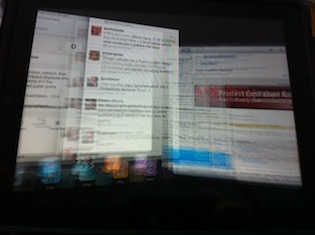 There’s a real struggle going on right now for control of the InBox. The platform is the iPad and the challengers are Flipboard and Twitter. I just tried the revamped Flipboard and still felt handcuffed between an art director’s vision of what I should like and what I would like to discover. Twitter on the other hand alerts me via push notification on @mentions, then leads me on a spiraling snipe hunt up and down various paths. I’ve been told there are better Twitter clients (Twitterific, says @jtaschek) but something tells us Twitter is closing in on the core model. Namely @mentions.

In the new world of the iPad circa iOS4.2, incoming information is divided neatly between email and social alerts. My work email vibrates when it arrives with an alert sound, but requires opening my InBox and then scanning the short abstracts. 4.2’s InBox threading sometimes hides the context of replies under the text of the last opened part of the thread, and from there you open URL citations into the Safari container with its own 9-deep navigation.

External alerts from my Twitter client appear on the screen with an audible chime and vibrate. @mentions are the trigger, opening the client and presenting various methods for unpacking the full message. There’s typically a URL citation, other @mentions to constrain the nature of the social cloud intended, and tools that fan out to follow various tweets, @mentions, and retweets of the various members of this little world encapsulated within. Elegantly, URLs are displayed within the app, with tools to expand to fill the frame, park outside in Safari, and forward.

Many social aggregators have mined citations to produce digests of trending stories and multimedia. Google Reader support in the new Flipboard and Delicious’ apparent folding are two sides of the same coin, a last ditch effort to ignore the impact of the social stream on the InBox. Where RSS used to capture so much of the flow of information, now social signals determine not only whether but when items reach the InBox. @mentions win the race to the InBox.

You might think just focusing on @mentions would produce a fatuously egocentric view of the stream. But in fact that’s exactly what we all do. Techmeme, for all its technology and human editorial, is still Gabe Rivera’s view of who’s talking about him, his issues, his view of what constitutes interesting material. And judging by his continuing success, if it’s all about Gabe, it’s all about us too. Us is remarkably stable in its basic parameters of interest. So-called tech news is really about the architecture and evolution of the technology that @mentions us.

The email InBox is not about us, it’s to us. Its architecture of to’s, cc’s, forwards, and blind cc’s is a window into the success or failure the outside world has in triggering responses from us: read this, reply to that, be aware but be quiet about, etc. @mentions are something more expansive; they inform and stimulate while at the same time opening a return channel that stays alive across the details of each message. Not just here’s what I’m doing or telling you, but here’s a key to a larger thread that carries over from node to node without closing down. @mentions are additive to the pool of interest, a signal that “I” think “you” should be aware of this, moving forward. So if in one message I @mention you and @kevinmarks, and another message next month I mention you and @dannysullivan, you become a link between those two people and their streams of messages and @mentions. Not necessarily a strong link, but repetition and patterns of repeated citation (retweet storms, live streamcasts) build out a cloud of dynamic interest.

What takes this beyond simple aggregation or filtering is the integration of direct messages. In email, such private messages are scoped by the cc’s and blind cc’s/forwards. The former tell us who’s included in what’s “private” but we have no idea as recipients of who constitutes the latter. Direct messages are essentially to’s in email terms, but currently that’s as far as they go in most systems. I haven’t figured out a way of sending multiple DMs on Twitter, but if and when this was possible it would bring with it all the implications of email’s management by (in)visibility. In an odd way, it would kill email only to implant it inside the new host at the center of social mail.

Whether email co-opts the social stream or not, groups have already provided a way to carry on scoped conversations without fear of leaking personal or business secrets. @mentions continue to exist in a parallel universe which will continue to expand outward along time and relationship dimensions. Since much of a person’s knowledge and interests can be communicated in general terms in the clear, direct messages will eventually become alerts to specific people or groups about where to look inside the @mention cloud. Today’s secret is tomorrow’s cruft, waiting for intelligent filters to flush out of our InBoxes. Yeah, I heard that. What else?

Already we’re seeing @mentions begin to consolidate around resolution engines that use the @mention cloud to normalize different @names across multiple systems. If @benioff becomes the preferred @mention because of its ubiquity on Twitter, it’s trivial to map those @mentions to a different username on Facebook or Chatter, and vice versa. Indeed, the Twitter @mention namespace has become the defacto standard. But an open one, the more that name is used across silos whether by bit.ly-style name resolvers or perhaps a common field for @twittername alongside user name and userid.

It’s possible Twitter might attempt to slow down the democratization of its @mention data by gating API access as they did with the first tool to harness this power, Track. But at least for now Twitter is more focused on making this more discoverable in its iPad client than any other I’ve used, by letting us click from @mention to profile to tweets, @mentions, and URLs. It’s a manual process for now, but one that is spreading to the Web client and the rest of the downlevel tools available. It’s completely changed how we consume conferences, live webcasts, and stolen moments in meetings, leaving the constant screen refreshes to our @mention cloud of forward-looking scouts.