We wrote about the Foursquare for websites OneTrueFan, at the startup’s launch at TechCrunch Disrupt in September. After three months in Alpha, OneTrueFan is opening its doors and launching in beta.

OneTrueFan is a service for web publishers that allows visitors to earn badges for interacting and sharing content on the site. The startup revolves around a game-format for visitors that allows you to see who is reading content in the site, compete for the most engagement and encourages you to share content within the service and on social networks.

As users share via OneTrueFan, they can earn points, and special badges from publishers. Users can see a leaderboard of fellow users who have been sharing content on a particular site and can mouse over fellow contributors to see more information about how they’ve been interacting with a site. All of this info can be seen on an interactive player bar at the bottom of a publisher’s website.

With the beta launch, the OneTrueFan player bar has gotten a massive visual and UI upgrade. And publishers can now install OneTrueFan on their site (previously only visitors could use OneTrueFan through its browser add-on).

The startup has also rolled out a news feed, which taps into your Twitter feed to give you a list of links you should visit based on what your contacts shared. Links are ordered based upon a combination of friends who have shared and visited the URL, strangers who have shared and visited the URL and how long ago the page was posted. Publishers will ultimately have access to a version of this news feed that lets them know in real-time what their fans are most interested in around the web.

The appeal of OneTrueFan for publishers is that it goes beyond a check-in to creates an element of interactivity around sharing of their content. If the startup can gain enough publisher and user participation, it could be an interesting model for news sites, in particular.

OneTrueFan is the brainchild of MyBlogLog’s founders Eric Marcoullier and Todd Sampson. MyBlogLog was acquired by Yahoo in 2007 (although we found out today that Yahoo is shuttering the service) Unsurprisingly, some of OneTrueFan’s interface is similar to MyBlogLog. 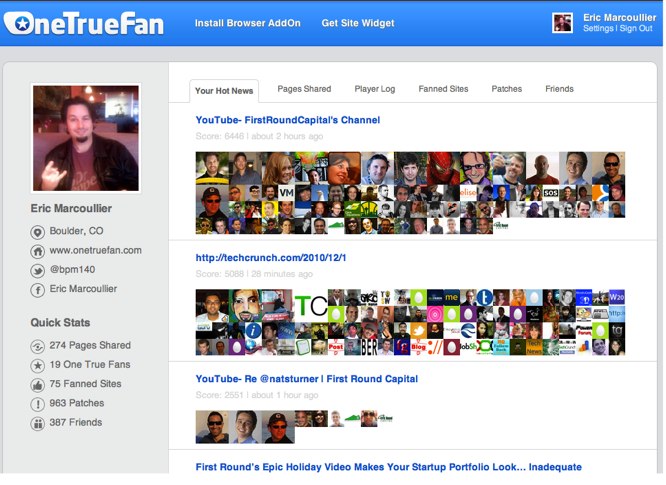