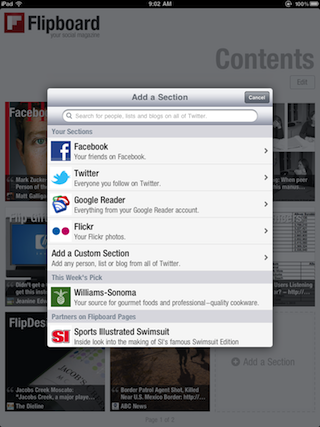 Given the success Apple has seen this year with the launch of the iPad, they decided to single out the device to give it its own “App of the Year” award. The winner? Flipboard. The social magazine app launched in July with some glowing reviews and since then, a few small updates have made it even better. But the update they’re releasing today makes it a lot better. So much so that if Flipboard was already the app of 2010, they’ve got to be the early frontrunners to be the iPad app of 2011 as well.

First of all, Flipboard has added both Flickr and Google Reader integration to bring more content into the system. Users of those services can easily link up their accounts to create new areas to browse on their Flipboard.

But the bigger news is what they’ve added to the content options that have existed on Flipboard since the beginning: Twitter and Facebook. Both of these areas on Flipboard now feature support for various sections of the services. So on Facebook, you can browse items shared in the News Feed, on your Wall, on the various Pages you follow, or filter items by the Friend Lists you have. You can also filter the stream to show just pictures or just links. With Twitter, you can now choose between your standard Timeline, just your Tweets, your Favorites, your @Replies, or any of your Lists.

And all of these new sections can be added as main Flipboard items with one click. To bring them up, you simply click on the section header (so in Twitter’s case “Twitter”, for example) and a pop-over menu appears.

Flipboard has also added the ability to send Tweets and/or Facebook status updates from within the app. When you’re in the Twitter and Facebook areas, you’ll see a new compose button along the top. Clicking on this brings up a composition area, similar to the one that Twitter for iPad uses (so you can still see the content you’re writing about). You can attach images or an article here as well. Clicking on your profile image allows you to toggle between Twitter and Facebook to share — and Flipboard threw in the ability to send a note to Google Reader this way as well. 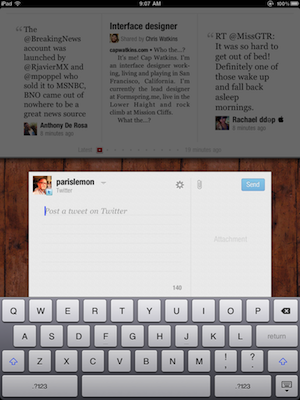 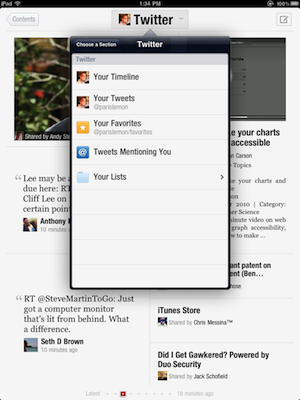 But there’s more. Flipboard has also altered the way content appears within the app. It used to be that they’d give you a preview of text and make you click a “Read on Web” button to load the full story. Now, depending on the content, they can load that page below the excerpt as you read it. If you click on this area, it will load the full content page for you to read. Or, if the site you’re reading has a full RSS feed, Flipboard will load the content that way. Yes, they’re finally using RSS.

On top of all this, it’s now more seamless to reply to Facebook messages and Tweets as well within Flipboard. And articles can easily be sent to Instapaper to read later. And you can set the Google Reader integration to remember what you  have and haven’t read already, making Flipboard a killer RSS reader itself.

Again, Flipboard was the 2010 app of the year before all of these features. Apple must really be loving their pick right now, because the app just got much better today. But the truth is that they had to. With the success of the iPad, the social browsing space is heating up. Rival Pulse recently released some really deep Facebook integration, making it one of the best ways to view Facebook on the device.

Meanwhile, news broke earlier today that Flipboard CEO Mike McCue has just accepted a seat on Twitter’s Board of Directors. So you can probably expect the integration to get even deeper. “I’m a big believer in the Twitter phenomenon both from a user and ecosystem point of view. So excited to join Twitter’s board and help any way I can,” McCue said when we asked about his new position. Both Flipboard and Twitter now share big time backing from VC firm Kleiner Perkins Caulfield & Byers as well. 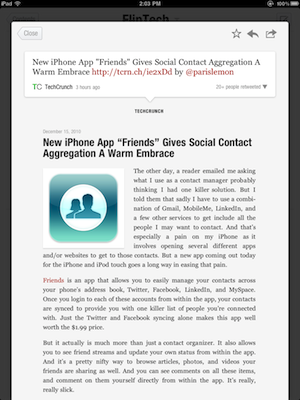 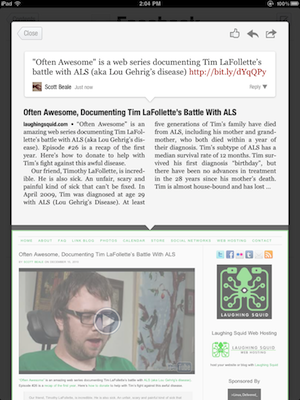 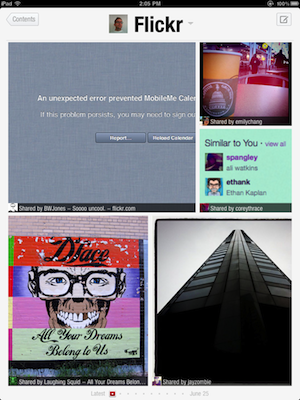 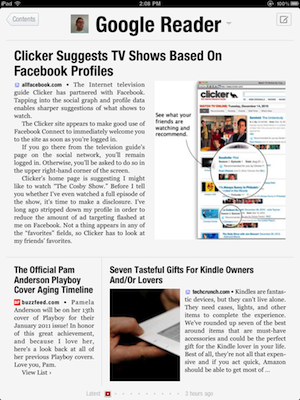